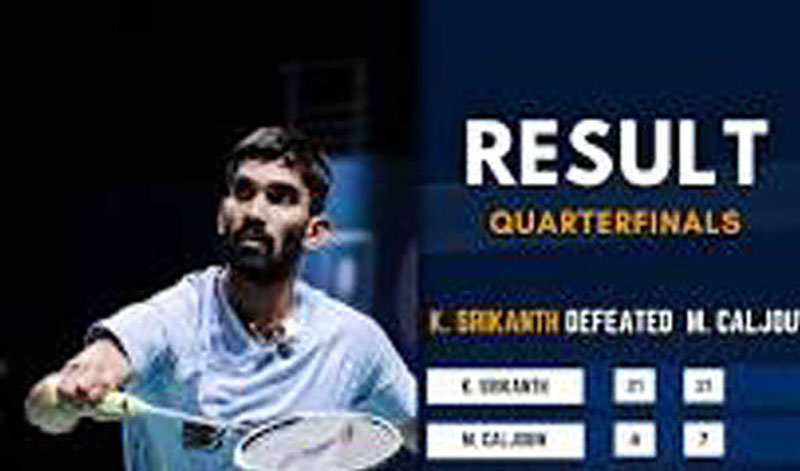 Huvela/UNI:  Indian badminton ace Kidambi Srikanth sailed into the BWF World Championships semifinals with an ease after defeating Mark Caljouw of the Netherlands 21-8, 21-7 in the men's singles quarterfinal here on Friday.

With his quarterfinal win over the Dutch shuttler, the former world no.1 Srikanth has assured medal for India; his first at the World Championships.

Srikanth had a dominant first half as he took healthy 6 point lead till the break. After the break, the Dutch shuttler managed to take couple of points but the Indian retaliated with his smashes and took the first game 21-8.

After the change of sides, Srikanth continued his dominance and went on to break with 8 point advantage, 11-3.

The Dutch made an effort to come back in the game, but Srikanth was not ready to lose even a single chance to make his opponent struggle and eventually won the match by taking the second game 21-7.

However, the two-time Olympic medallist PV Sindhu's run ended in the quarterfinal after suffering 17-21, 13-21 defeat at the hands of Tokyo Olympic silver medallist Tai Tzu Ying.

Tai kept hold on Sindhu since the beginning of the opening game, as she had a 5-point cushion at the time of mid-game interval 11-6.

After the interval, Tai continued her supremacy and didn’t allow Sindhu to settle in the game. A late action from the Indian shuttler helped her to reduce the point gap from 12-17 to 16-18.

Later, a wide shot from Sindhu handed a game point to Tai and the Taipie shuttler pocketed the first game 21-17 in 17 minutes of play.

The second game started with a tight contest as both Sindhu and Tai gave each other a tough competition and the game went onto breather with Tai Tzu taking 3-point advantage 11-8.

After the break, Sindhu reverted with back-to-back points and reduced scoreboard deficit by levelling it at 12-all. Then, Tai Tzu shifted a gear and sealed the deal; taking second set 21-13 and assured her first World Championships medal.

Later in the day, Lakshya Sen and HS Prannoy will take the court to seal their spot in the semifinals.