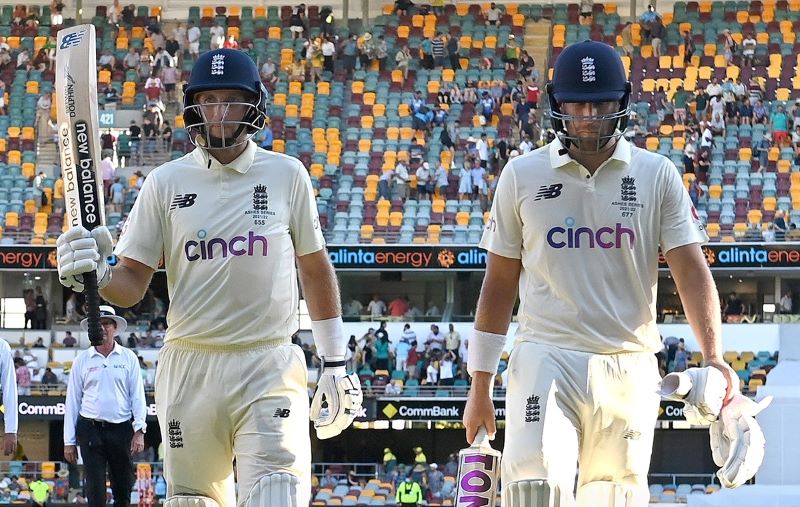 The Ashes: Root, Malan fight back; England trail Australia by 58 runs at stumps on day 3 of first Test

Brisbane/UNI: Joe Root and Dawid Malan's unbeaten 159-run partnership took England to 220/2 at stumps on the third day of the first The Ashes Test against Australia at the Brisbane Cricket Ground (The Gabba) here on Friday.

England trail Australia by 58 runs, with Root and Malan scoring unbeaten knocks of 86 and 80 respectively at the end of the day's play.

With a daunting task on their hands to save the first The Ashes Test, Rory Burns and Haseeb Hameed walked in for England.

The hosts kept the visitors in check, with Pat Cummins striking for Australia in the ninth over. Burns was caught behind for 13.

Although the Australian bowlers tried to create dot ball pressure, Hameed and Malan found gaps at regular intervals for clearing the rope.

The fast bowler Mitchell Starc dismissed Hameed (27) to give Australia the much-needed breakthrough.

However, Malan along with his captain Root recovered England, who were 61/2 after 21 overs, from early dents.

The duo stitched 48-run partnership for the third wicket at tea.

After resumption, Root played a beautiful cover drive for four to bring up the 50-run stand between him and Malan.

The England captain brought up his 51st Test half-century off 80 balls. Soon, Malan joined Root as he raised his bat to welcome his eighth fifty off 121 balls in the red-ball cricket.

Both Malan and Root denied Australia from taking any wicket in the third session, helping England claw their way back into the first Test.

Earlier, Australia's left-handers Travis Head and Starc, who were unbeaten on 112 and 10 respectively, returned to the middle to frustrate England in the morning.

The duo hammered five boundaries and one maximum before Starc (35) holed out to deep square leg off Chris Woakes.

Mark Wood got the last and crucial wicket of Head for a well-made 152.

Australia folded for 425, leading England by 278 runs in the first innings.