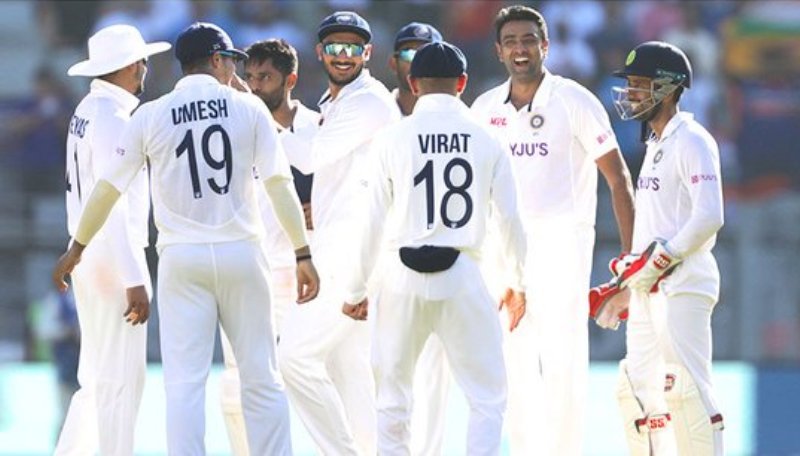 Mumbai: New Zealand ended the third day's play at 140 runs for the loss of five wickets against India, still needing 400 runs to win the match, in the ongoing second Test match here on Sunday.

Daryl Mitchell remained the top scorer for the squad with his 60 runs knock and Axar Patel picked up his wicket to keep things tough for the visitors.

Henry Nicholls (36*) and Rachin Ravindra  (2*) are currently at the crease.

Earlier, India declared at 276 for 7, with Ajaz Patel taking four wickets and Rachin Ravindra picking up three wickets. The New Zealand left-arm spinner Ajaz ended the innings with the best figures ever against India (and best at the Wankhede) - 14 for 225, going past England's Ian Botham (13/106 against India in 1980).

India openers Mayank Agarwal and Cheteshwar Pujara stitched a solid 107-run partnership, which put the hosts in the driver's seat. While Mayank (62) registered another fifty-plus score, Pujara scored 47 before the duo were dismissed by Ajaz in quick succession.

Virat Kohli joined Shubman Gill, who came in at no.3, settled in no time and took India to 142/2 before heading for a well-served lunch. New Zealand's another left-arm spinner Rachin Ravindra claimed his maiden Test wicket as he denied Gill (47) of a half-century soon after the lunch. The right-hander gave an overhead catch at short cover area.

Shreyas Iyer and Kohli took India past the 200-run mark. Soon Ajaz returned to take his 14th wicket, with Iyer getting stumped after smashing two maximums. In no time Rachin bagged the prized wicket of the India captain, who dragged the ball back onto his own stumps. And Wriddhiman Saha became Rachin's third wicket.

Axar Patel and Jayant Yadav in the middle helped India take their lead over 500. Axar played a quickfire knock of 26-ball 41 not out before the hosts declared at 276/7.