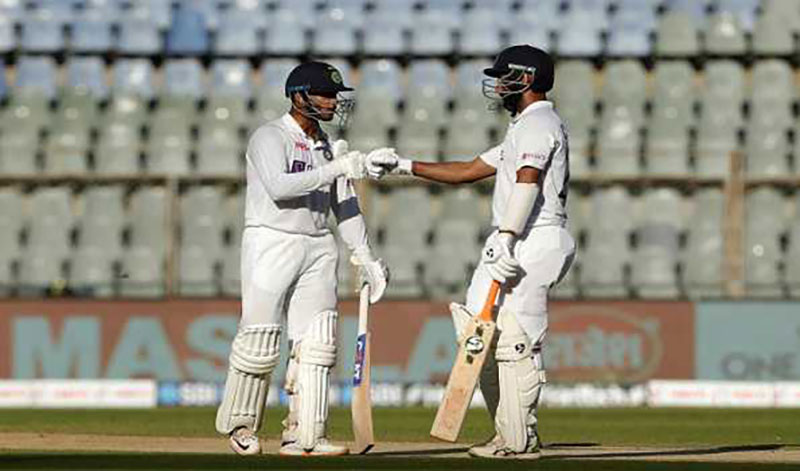 Mumbai/UNI: Mayank Agarwal and Cheteshwar Pujara extended India's lead to 332 against New Zealand at stumps on day two of the second Test match here at the Wankhede stadium on Saturday.

Instead of enforcing a follow-on, the hosts chose to pile on runs over the Black Caps, who were bundled out for 62 post-tea.

The India top-order batters Mayank, who registered 150 in the first innings, and Pujara stitched an unbeaten 62-run opening partnership before the bad light cut short the final session.

Earlier, Mohammed Siraj rattled the top-order of the visiting side, and spinners Ravichandran Ashwin, Axar Patel and Jayant Yadav cleaned up the rest. New Zealand's 62 all out is the lowest total by any team against India in Tests.

The fast bowler Siraj, who was itching to go, dismissed both the Black Caps openers. Will Young edged to Virat Kohli at second slip and stand-in captain Tom Latham was caught at deep square leg. Siraj returned to knock over veteran Ross Taylor, reducing New Zealand to 17/3.

Soon, Kohli switched to spin and handed the red ball to Axar Patel. India spinners, too, joined the party, starting with Axar who got Daryl Mitchell leg-before. Ashwin bowled Henry Nicholls on his very first ball and Jayant dismissed Rachin Ravindra on the stroke of tea.

Post-tea, Ashwin dismissed Tom Blundell and Tim Southee in the space of just one delivery. Substitute Suryakumar Yadav, who was fielding in place of Shubman Gill, dived to his left to complete a bat-pad catch of Southee.

Wicke-keeper Wriddhiman Saha displayed some magnificent work when he collected the ball to stump William Somerville off Ashwin. However, Somerville survived as he was well inside the popping line. However, the Black Caps folded after Axar dismissed Kylie Jamieson.

The first session belonged to New Zealand left-arm spinner Ajaz Patel, who took the perfect 10. Ajaz became the only third bowler after England's Jim Laker (10/53 against Australia in 1956) and India's Anil Kumble (10/74 against Pakistan in 1999) to claim the 10-wicket haul.