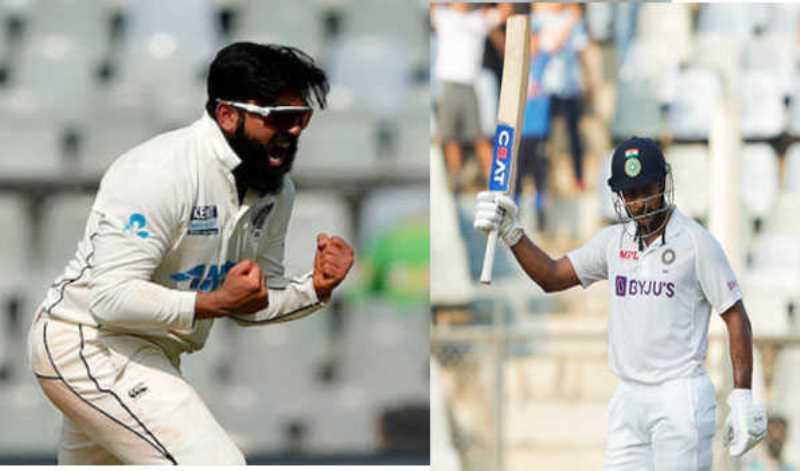 Mumbai, Dec 3 (UNI) New Zealand's Mumbai-born left-arm spinner Ajaz Patel spun a web around India before Mayank Agarwal's fighting 120 not out helped the hosts to reach 221 for the loss of four wickets at stumps on day one of the second Test match here at the Wankhede stadium on Friday.

Ajaz picked up four wickets to rip through the India top-order, putting the hosts on the back foot. Among the four wickets, the spinner bagged the prized wicket of India captain Virat Kohli who was making his return to red-ball cricket after a break. The other three wickets were of Shubman Gill, Chesteshwar Pujara and Shreyas Iyer.

India were 80/0 but Ajaz's spin magic reduced the hosts to 80/3. In spite of losing partners, opener Mayank held on to one end and kept the scoreboard ticking on the Mumbai track. Shreyas Iyer, the Player of the Match in the first game, along with Mayank in the middle dragged India to 160/4 before Ajaz gave New Zealand another breakthrough.

After Iyer (18) got caught behind, wicket-keeper batter Wriddhiman Saha, another hero from the first Test, along with Mayank stood tall against New Zealand. Saha (25*) along with Mayank took India past the 200-run mark with their fifty-plus partnership at stumps.

Earlier, India openers took the aggressive route against New Zealand seam bowlers after opting to bat first. In spite of the bounce that the Mumbai track offers, both Gill and Mayank batted with brilliant discipline. Soon the visiting stand-in captain Tom Latham switched to spinners, bringing in Ajaz in the eighth over.

The moisture on the red soil assisted the left-arm spinner as the ball continued to turn. New Zealand wicket-keeper Tom Blundell made a blunder as he missed stumping Gill, when Ajaz gave a beautiful flight to the ball which went down and turned on the track. However, the mistake didn't cost New Zealand as on the next ball Gill (44) was caught at slip.

The left-arm spinner got rid of Pujara and Kohli for ducks in the space of just three balls. While Pujara was bowled when he decided to come down the track, Kohli was given leg-before not before a lengthy review. Ajaz flighted the ball which dipped below Pujara's bat to clean his off-stump. Meanwhile, the India captain departed for a four-ball duck off Ajaz.

As the India captain tried to defend, one half of the ball was near the inside edge and the other half on the pad. The on-field umpire signalled out but Kohli reviewed it immediately. Although the TV umpire stated that "there's no conclusive evidence of bat first", it seemed the ball passed the bat.

On ball tracking, the ball hit the stumps, which forced Kohli to walk off the ground not before having a chat with the on-field umpire.