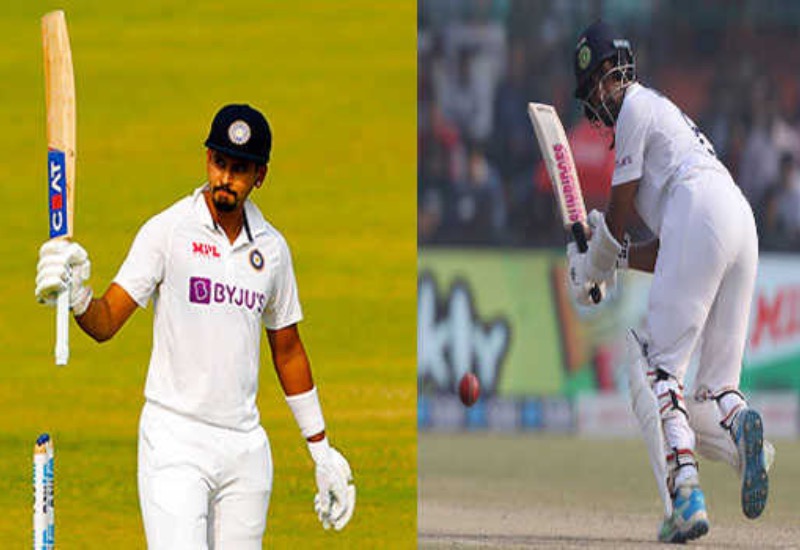 Kanpur/UNI: India declared their second innings at 234 for 7 and set a massive target of 284 for New Zealand on Day 4 of the first Test match played Sunday.

The Indian side also got rid of opener Will Young (2) towards the end of the final session to finish Day 4 at a consolidated position.

New Zealand were 4 for 1 at stumps, needing 280 runs on the final day for victory.

India had declared at 234 for 7 for an overall lead of 283 and gave the Kiwis four tricky overs to face under fading light.

Ravichandran Ashwin was lucky to get the umpire's decision in his favour after he appealed for LBW against Will Young (2).

The Hawkeye, however, showed the ball missing the stumps. The Kiwi batsman was not granted the review as the time for seeking it had elapsed.

With that scalp, Ashwin became the joint third highest wicket-taker in Indian cricket with Harbhajan Singh who has 417 wickets under his belt.

Shreyas Iyer and Wriddhiman Saha shared the honours for India on a day when they started badly by losing six wickets with just 103 runs on the board.

Iyer (65) became the first Indian to score a century and a half-century in each innings of debut Test and Saha played a gritty unbeaten 61 runs to ferry India out of the troubled water, batting with a stiff neck.

Eventually, Iyer gloved a short ball down the leg-side to Tom Blundell behind the stumps, but by then the middle order batter had helped India take the lead past the 200-run mark.

Axar Patel (28) conjured another 67-run eighth-wicket stand with Saha to push the Black Caps out of the contest.

Anticipating declaration by captain Ajinkya Rahane, Axar made his intentions clear by smacking Ajaz Patel a six at the fag end of the day.

With Saha also reaching his sixth Test fifty, India declared the second innings on a score from where they cannot lose.

But for the pacers, New Zealand are in the game. Tim Southee (3 for 75) and Kayle Jamieson (3 for 40) bowled exceptionally well, compared to the spinners who failed to impress.

Southee had ripped through the cream of India batting, especially the ball to Mayank Agarwal which swung considerably was one of the highlights of the day's play.