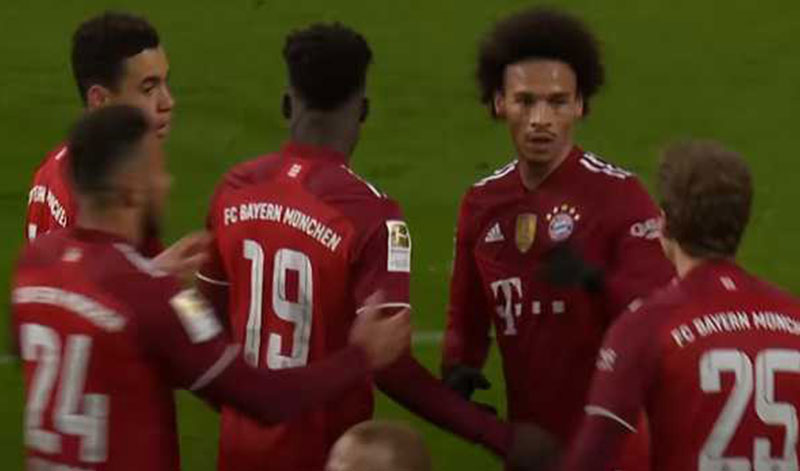 Berlin/UNI/Xinhua: German giants Bayern Munich defended their top spot after carving out a hard-earned 1-0 win over resilient Arminia Bielefeld on the sole goal from Leroy Sane at the 13th round in Bundesliga on Saturday.

The "Bavarians" took the reins from the starting whistle and pressed Bielefeld into the defence.

Bayern created several chances in the opening stages as Muller headed narrowly wide in the 6th minute before Alphonso Davies unleashed a dangerous shot from close range with 15 minutes gone.

Arminia tried to reach success with fast breaks but couldn't do damage to Bayern's well positioned defence in the first 45 minutes.

Bayern assumed control again after the restart as Sane and Muller continued to squander presentable chances in front of the target in the opening period of the second half.

Lewandowski should have broken the deadlock at the hour mark, but the Pole missed the far post with all time and space from inside the box.

Bayern's pressure eventually paid off after a combination via Muller allowed Sane to open the scoring with a well-placed curl from the edge of the box into the top right corner with 71 minutes gone.

The hosts pressed for another goal, but Ortega denied Kingsley Coman in the 77th minute before Sergne Gnabry rattled only the woodwork following a solo run moments later.

With the 10th victory of the campaign Bayern Munich defended the top spot in the Bundesliga table while Arminia Bielefeld stay on the 17th position, which is a direct relegation spot.

"I am content with the performance but of course not with the result. If you play against Bayern, you won't get many chances but if you get a chance, you must finish the job," Bielefeld head coach Frank Kramer said.

"It was a labored victory. We are happy that we secured all three points on home soil. Bielefeld defended well and made our life difficult, but it was important to keep a clean sheet today," Bayern captain Manuel Neuer said.

On Sunday, Eintracht Frankfurt clash with Union Berlin before Leipzig take on Bayer Leverkusen to conclude the 13th round.