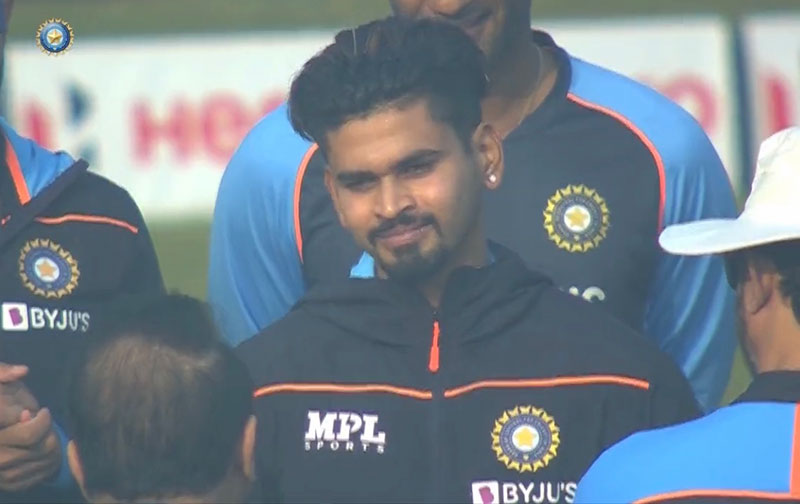 Kanpur/UNI: Shreyas Iyer made his Test debut in the first Test against New Zealand and received the India cap from cricket legend Sunil Gavaskar  at Green Park Stadium here on Thursday.

The series promises to be a test for batsmen, given the absence of star players including Rohit Sharma, KL Rahul, Virat Kohli and Rishabh Pant, and the Blackcaps would like to pick this big hole.

🎥 A moment to cherish for @ShreyasIyer15 as he receives his #TeamIndia Test cap from Sunil Gavaskar - one of the best to have ever graced the game. 👏 👏#INDvNZ @Paytm pic.twitter.com/kPwVKNOkfu

However, New Zealand themselves are without the services of Devon Conway, who is one of the best batsmen of spin.

At the same time, the Blackcaps will be tested in the batting department with Ravichandran Ashwin, Ravindra Jadeja and Axar Patel, who had a dream debut series against England by picking 27 wickets.

With some of the seniors staring at decline, it is a massive opportunity for young turks to stake their claim.

New Zealand are the World Test Champions, but they have not won a series in India over the last decade, but they would like to change it.

What does the pitch have in store? 🤔

Their previous visit in 2016 was disappointing and captain Kane Williamson will hope to put this behind and focus on the present.

However, it will not be a cakewalk for the Blackcaps even though some of the star players are missing the Test, as they face the seasoned Indian spinners who are itching to go all out against the visitors.