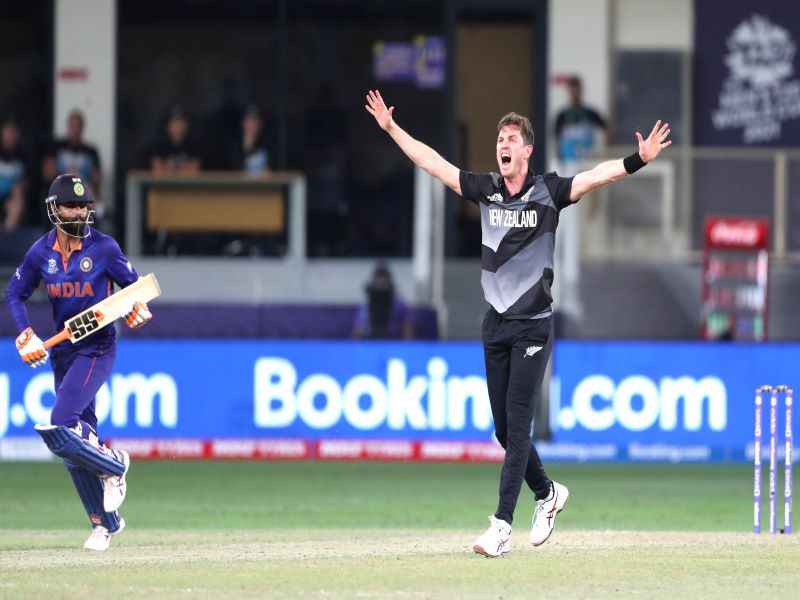 Dubai/UNI: India lost to New Zealand by 8 wickets in a Super 12 Group match, here at the Dubai International Stadium on Sunday.

Chasing a paltry target of 111 runs, New Zealand achieved the target in a clinical fashion by ending the innings at 111 for 2 in 14.3 overs.

With this loss, India's hopes to qualify lies in the hands of babies of world cricket like Scotland, Afghanistan and Namibia to beat a formidable New Zealand, with a big margin. This looks like a big ask for India.

Virat Kohli, who had announced stepping down from T20 captaincy after the T20 World Cup event, failed to anchor the innings to make a match out of it, which he did wonderfully well against Pakistan by hammering a half-century.

Today, the captain failed miserably as he could manage only 9 runs after he played a rash stroke.

The top order KL Rahul, Ishan Kishan, Rohit Sharma also failed to give a rollicking start for India, knowing very well the dew factor playing its role in the second innings, making batting easier for the chasing side.

It was an all-round performance exhibited by the Kiwis. First, their bowlers led by pacers Trent Boult and Tim Southee, rattled the Indian top order for the second consecutive match, after losing very badly to the classy Pakistan.

Chasing a paltry 111 for win, openers Martin Guptill (20) and Daryl Mitchell posted 24 runs on the board in 3.4 overs, before the former was holed out to Shardul Thakur off Jasprit Bumrah.

Daryl and Captain Kane Williamson's 72-run partnership for the second wicket put India out of the contest.

Daryl was caught by Rahul off Bumrah after scoring a match-winning 49 of 35 balls, which was decorated with four boundaries and three sixes.

The remaining runs were made by Williamson (33*) and Devon Conway (2*).

Earlier, India could only manage their second lowest total in T20 World Cup events after they set a paltry 110 for 7 in their do-or-die match.

Skipper Kohli sprung a surprise on New Zealand by sending Ishan Kishan as opener in order to blunt Trent Boult's threat with the new ball. But, the left-arm pacer sent thunderbolts even at the left-right combination and terrorised the Indian openers.

India's insane batting continued with experienced batsmen like KL Rahul and Rohit Sharma, who played rash strokes in powerplay when it was not required as the run rate was run-a-ball, which is good to start with.

After getting three wickets under 8 overs, New Zealand captain Kane Williamson found a window to slip overs out of medium pacer Adam Milne and leg-spinner Ish Sodhi, when the batsmen weren't in the attacking mode.

For the first time in years, there were no boundaries scored from 6th to 15th over, which underlined the dominance of New Zealand bowlers led by Boult and Sodhi who picked five wickets between them.

Boult picked 3 wickets for 20 and Sodhi 2 for 17. Southee and Milne scalped one wicket each.

Sent into bat, India lost a new pair of openers, Rahul and Ishan Kishan in Powerplay.

Boult struck early by dismissing Kishan (4) and almost had Rohit Sharma, who came at Number three, for a golden duck. Milne dropped a sitter to give Rohit an early life off the first ball he faced.

But, the dropped chance did not cost New Zealand much as Sodhi and pacer Southee knocked off KL Rahul (18) and Rohit (14), leaving India tottering at 40 for 3 in 7.4 overs.

Things went from bad to worse for India as the rescue-man Kohli had hammered 51 in the last match against Pakistan, but today he did not contribute much.

Sodhi sent the Indian captain back in the hut after he made 9. He lost his wicket trying to slog-sweep the leg spinner, but the ball ballooned up for Boult to take an easy catch at the deep, leaving India tottering at 48 for 4 in 10.1 overs.

Ravindra Jadeja (26 no) tried to raise the tempo for India, but did not get any support from other batsmen, except Pandya towards the end.