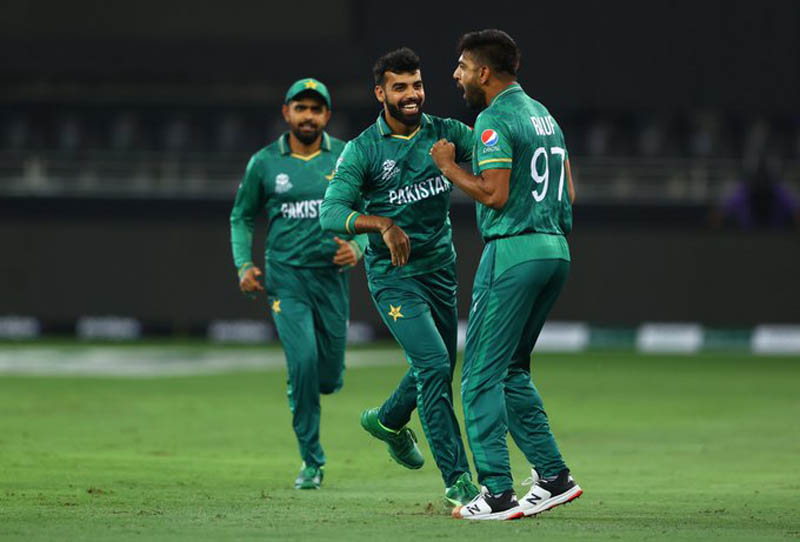 Dubai/UNI: A late 7-ball 25 cameo by Asif Ali, after a half-century by skipper Babar Azam, fired Pakistan to a five-wicket win over Afghanistan with an over to spare while chasing 148 in the Super 12 match of T20 World Cup's Group 2 here on Friday.

This was Pakistan's third successive win in the stage; making them strong favourites to qualify for the semi-finals as they sit top of the table with six points. Afghanistan, on the other hand, remain second in the six-team group with two points in two games.

Opting to bat first, the losing side recovered from a top-order collapse to put up a fighting total of 147/6 in 20 overs after skipper Mohammad Nabi (35* off 32) and lower-order batter Gulbadin Naib (35* off 25) added 70-odd runs for the seventh wicket. Imad Wasim picked two Afghan scalps while Shaheen Afridi, Hasan Ali, Shadab Khan, Haris Rauf grabbed a wicket apiece.

In reply, Pak captain Babar Azam led the chase with a 47-ball 51 but lost his wicket to Rashid Khan at a crucial juncture of the match. However, Ali, who played a similar match-winning knock against New Zealand in the last game, came to the side's rescue once again by smashing four sixes; three of them in the 19th over bowled by Karim Janat (0/48).

At the beginning of the chase, Pakistan lost their first wicket early as Mohammad Rizwan (8 off 10) lost his wicket to Mujeeb Ur Rahman (1/14). Azam and Fakhar Zaman (30 off 25) then steered the chase by adding 63 runs off 52 balls for the second wicket.

At the Halfway mark, Pakistan was comfortable at 72/1, but Afghan wrist spinner Rashid Khan (2/24) brought his team back in the match by picking his 100th and 101st T20I wicket while becoming the quickest bowler to reach the milestone. The scalps included the crucial wicket of Azam in the 17th over.

The Afghan comeback, however, was short-lived as Asif Ali soon sealed the game by taking Janat for 24 runs in the 19th over.