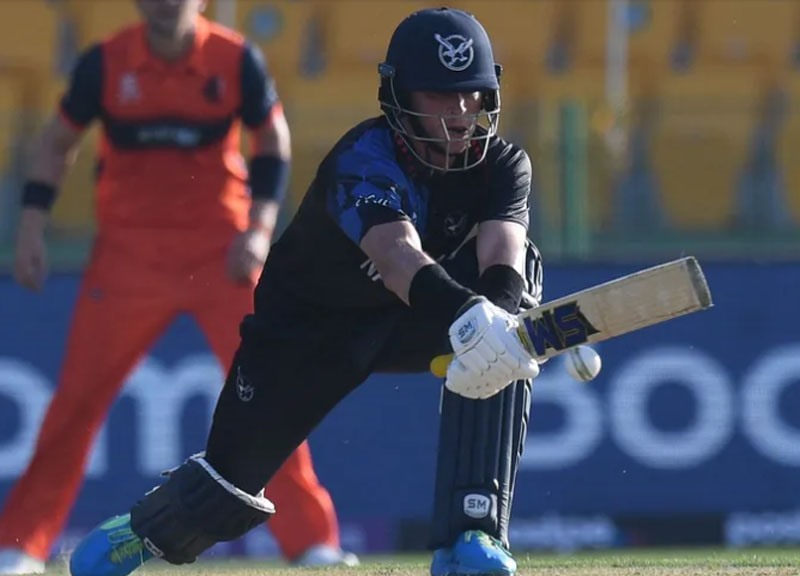 Muscat: David Wiese produced a stunning knock as Namibia dug themselves out of a precarious position to beat the Netherlands by six wickets and record their first victory of the ICC Men’s T20 World Cup 2021.

Following the defeat to Sri Lanka first up, the debutants looked in all sorts of trouble chasing the Netherlands’ 164 for four when they slipped to 52 for 3 after nine overs.

But it was then that Wiese and skipper Gerhard Erasmus came together, and they proceeded to turn the match on its head.

Wiese hit three sixes as Namibia added 36 in the next three overs to shift the momentum back their way.

And he just kept going, eventually finishing on 66 not out from just 40 balls to carry his side to victory.

Erasmus could not quite complete the job, falling caught behind with 20 still to get, but his partnership of 93 with Wiese swung the game.

The win keeps Namibia’s hopes of reaching the Super 12 alive, while the Netherlands now need to beat Sri Lanka in their final match to have any chance of making it through.

Max O’Dowd had earlier made history as the first player from the Netherlands to score back-to-back half-centuries at the ICC Men’s T20 World Cup, but unlike in the Ireland defeat, this time he was ably supported.

First it was Stephan Myburgh, whose 17 from 16 deliveries allowed the opening pair to add 42 at a good rate. And after Myburgh and Roelof van der Merwe had fallen, Colin Ackermann joined O’Dowd, with the duo putting on 82 for the third wicket before Ackermann holed out off the bowling of Jan Frylinck, who had also done for Myburgh.

O’Dowd looked in prime form with the bat, but lived dangerously with his running, twice taking on singles that would have seen him a mile short in case of direct hits. Neither did though, and he brought up his half-century in style by lifting the ball over extra cover for four.

By the time Ackermann departed, the Dutch had reached 137 for three, setting the platform for Scott Edwards to finish with a flourish, cracking 21 off 11 deliveries and taking up the charge from O’Dowd, who was run out in the final over for 70, sacrificing himself for his teammate to get back on strike.

The Dutch total looked formidable, even as Zane Green struck successive boundaries off Ackermann’s first over, the second of the reply.

He played on to his stumps off the bowling of Fred Klaassen for 11 and then the spinners looked to have made the difference as Ackermann bowled Craig Williams and Pieter Seelaar did the same to dismiss Stephan Baard.

The Dutch skipper completed a wicket maiden in the ninth over, but from there it was the Wiese show.

He hit straight and long, whether it was off spinners or quicks, with Klaassen the only bowler to keep the chase in check.

The problem was, Klaassen could not bowl every over, and the rest of the Dutch attack had no answer to Wiese, who hit five sixes in total before JJ Smit finished the job with 14 off eight balls.