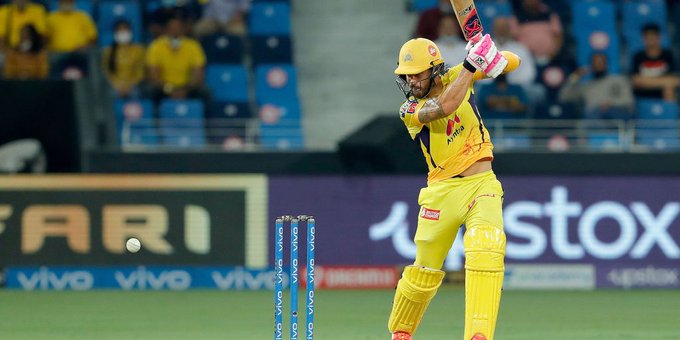 Dubai: Chennai Super Kings batsmen were brutal in their approach as they posted 192 runs for the loss of three wickets against Kolkata Knight Riders in the Indian Premier League final match here on Friday.

Faf du Plessis remained dominating in the match as he scored 86 runs by playing 59 balls. He was dismissed in the last ball of the innings as he tried to send the ball out of the park. He was caught by Iyer.

He did not give KKR bowlers a chance to recover and kept on hammering big shots after Dinesh Karthik lost the chance of stumping him early.

Faf hit seven boundaries and three sixes in the innings where he dominated the proceedings.

CSK lost the wicket of Ruturaj Gaikwad  after he added 32 important runs with his willow.

Sunil Narine picked up his wicket to give CSK the first jolt.

However, Robin Utthapa, who once played for KKR, added quickfire 31 runs off 15 balls to keep the scorecard running fast.