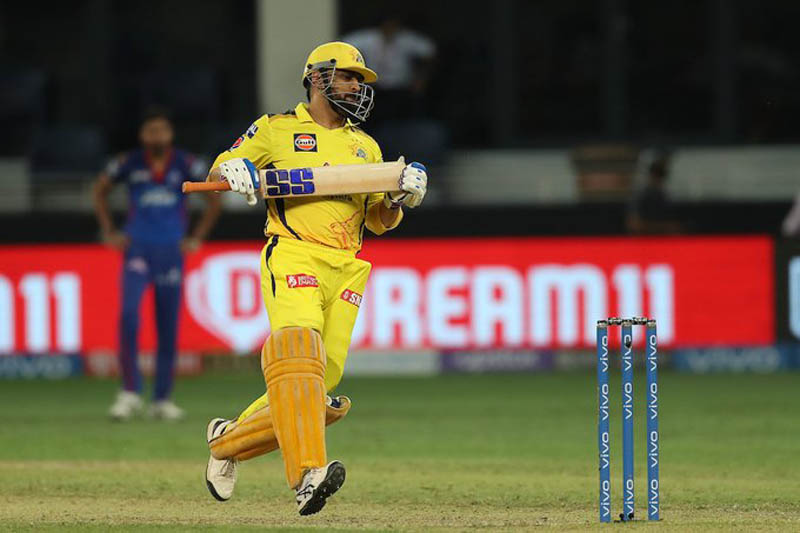 Dubai/UNI: MS Dhoni's cameo down the order after Ruturaj Gaikwad and Robin Uthappa's half centuries, ensured a four-wicket win for Chennai Super Kings' over Delhi Capitals while chasing 173-run target in the IPL 2021 Qualifier 1 here on Sunday.

With the victory, the three-time champions have now reached IPL finals for the ninth time. DC, on the other hand, will wait for the winners between Royal Challengers Bangalore and Kolkata Knight Riders, who will face them in Qualifier 2 for another shot at the final.

Earlier, the first innings of the match saw some tantalising batting displays by the likes of Prithvi Shaw (60 runs off 34 balls) and Rishabh Pant (51* off 35) to post 172/5 in 20 overs.
In reply, CSK opener Gaikwad scored 70 (50) after Uthappa's 44-ball 63 gave a flying start to the chase. However, it was captain Dhoni, who stepped in to finish off the job in the final over after DC made attempts for a late comeback win.

Chasing 173, CSK suffered early setback with Faf du Plessis getting holed out for 1 by Anrich Nortje.

The success for the feilding side stood for nothing as no. 3 Uthappa didn't take much time to settle in before hitting big shots. Avesh Khan faced the music as the genuine pacer was hammered all around the park for 20 runs in the 6th over. The end of the power play left broad smiles on CSK players faces in the dugout as 59 runs came off it.

Gaikwad also found ocassional boundaries during the course of the partnership that fetched CSK 81 runs by the end of 10 overs.

Uthappa shot as many as five fours and two sixes to reach his first half century in two years.

His innings slowed down once he reached fifty as the veteran batsman battled cramps. Gaikwad took this as his cue to take charge and shot Axar Patel for a six and a four in the next over to help CSK go past 100 runs in no time.

Following some medical attention, Uthappa too came back to fire two boundaries in the 12th over of Ashwin.

However the complexion of the game changed all of a sudden with Delhi taking three wickets in the next nine balls. The comeback was inspired by Tom Curran, who picked two wickets in the 13th over with Shreyas Iyer taking a blinder of Uthappa at the long-on first.

Curran then dismissed newly-in Shardul Thakur for a golden duck off the final ball of the over.

Ambati Rayudu (1 off 3) followed Thakur back to the dugout in the next over when he was ran out by another fabulous fielding effort by Iyer.

However, having Gaikwad not out at 50 at the other end meant CSK's worries for run was taken care of. The opener smashed four boundaries in the next three overs while Moeen Ali placed a couple as well; leaving CSK 24 runs to chase in the last two overs.

Gaikwad then left the job unfinished after failing to clear the square leg boundary off Avesh Khan. Ali (16 off 12) followed next as Curran removed the Englishman at the beginning of the last over for his third wicket of the night.

That was last of Curran's joy as newly-in MS Dhoni (18* off 6) finished off the game by hitting three fours and a six to chased down the total with two balls to spare.