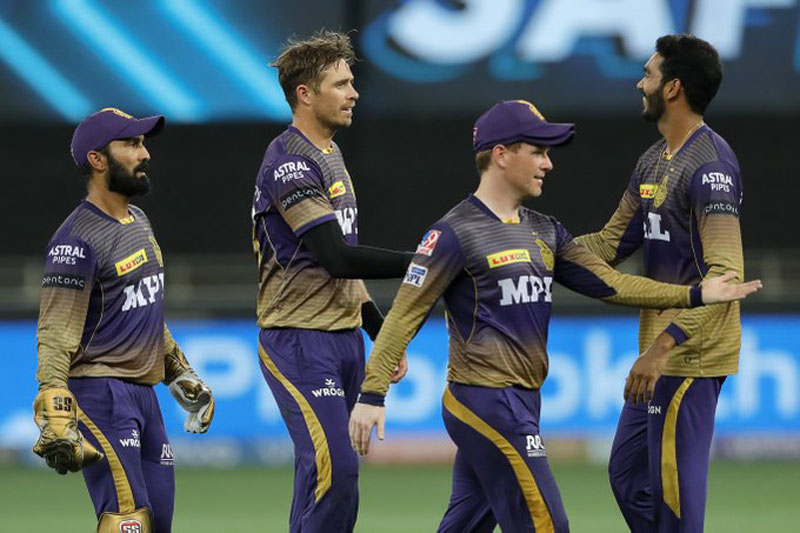 Tim Southee (2/26), Shivam Mavi (2/29) did the damage to SRH top-order while Varun Chakravarthy (2/26) took care of the middle-order in the latter half of the innings.

Among SRH batters, Kane Williamson contributed the most with a 21-ball 26 while Abdul Samad fired 25 off 18 on a day when just 43 runs were scored in the middle overs (7th over to 15th) by the bottom-placed side.

Hyderabad skipper Kane Williamson (26 off 21) took the sole charge of moving the scoreboard during the fielding restrictions with four boundaries while allowing Priyam Garg to settle at the other end.

The captain, however, paid the prize for attempting a non-existent single as he was run out by Shakib Al Hasan (1/20) with a direct hit off his own follow through in the 7th over.

SRH scoreboard moved at a snail pace with Abhishek Sharma and Garg were provided no access to the boundaries by KKR slow bowlers.

The side barely crawled to 50 runs by the 10th over while the urgency of increasing the run rate soon hurting them.

Hasan had Sharma (6 off 10) at the beginning of the 11th over after the 19-year-old southpaw wild swing off the crease saw him getting stumped by Dinesh Karthik.

Runs continued to come at a premium for SRH as Garg (21 off 31) fell 19 runs later to Varun Chakravarthy, who picked his 14th and 15th wicket of the tournament with the scalp of Jason Holder (2 off 9) next.

Reeling at 80/6, some intent for scoring finally came through Abdul Samad, who scored a 18-ball 25 to help SRH go past 100 runs.