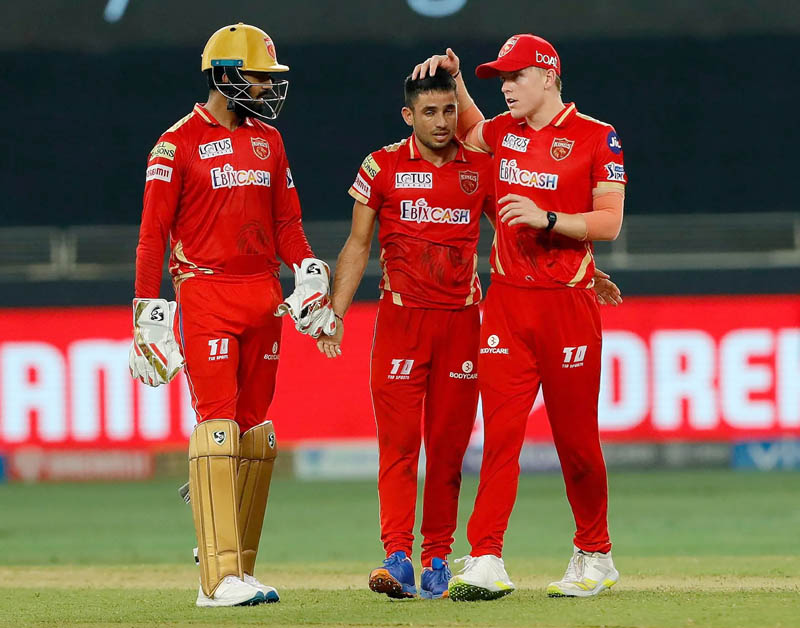 With the win, PBKS are now locked on 10 points in a three-way battle for a top-four spot with KKR and Mumbai Indians, who have played a match less (11).

Punjab bowlers played their role in the win as well as the likes of Arshdeep Singh (3/32) and Ravi Bishnoi (2/26) stopped the KKR flow of run at the death.

Chasing 166, PBKS had luck on their side as Mayank Agarwal was dropped as early as the second ball of the innings by KKR captain Eoin Morgan, who earlier continued his horrible form with just 2 runs.

The dropped catch proved too costly for KKR as Agarwal went on to score 40 runs (27 balls) for the opening-wicket 70-run stand with skipper KL Rahul.

The opener, however, missed out on his half-century as he smacked Sunil Narine's (1/30) full length delivery straight to Morgan at cover.

Varun Chakravarthy (2/24) gave KKR a further breather by removing newly-promoted no. 3 Nicholas Pooran (in absence of Chris Gayle, who left the team citing bubble fatigue) for 12 (7).

This had little impact on the run flow with Rahul taking charge of the run chase. The PBKS skipper played smart cricket by being cautious against KKR mystery spinners while going after the pacers on a slow surface. In-form Aiden Markram also complimented his captain by staying in control of his innings at the other end.

The duo steadily added 45 runs for the third wicket with Rahul eventually reaching his fifty with a flat six off Tim Southee in the 15th over.

Markram (18 off 16) switched to an aggressive stance as well by bludgeoning Narine for a huge six over the deep mid-wicket but the South African fell a ball later.

With 35 runs needed off the last four overs, PBKS appeared to choke again as Deepak Hooda was dismissed by Shivam Mavi after scoring just 3 runs.

KKR bowlers further created opportunities to dismiss Rahul but their fielders just couldn't hold on to their catches on the night. Rahul was first dropped at 57 by Dinesh Karthik, who pulled out of a diving catch fearing collision with square leg fielder.

Rahul was then dropped at 62 by Rahul Tripathi, who first thought he took a clean diving catch at deep mid-wicket but third umpire said otherwise.

The captain eventually fell to first-innings star Iyer in the final over at 72, giving the fourth-placed team another shot at win with four runs needed off as many balls. However, KKR lost the initiative yet again as Tripathi dropped Shahrukh Khan (22 off 9) at cow corner boundary. The resulting fumble went over the boundary for a six and a win for KKR.