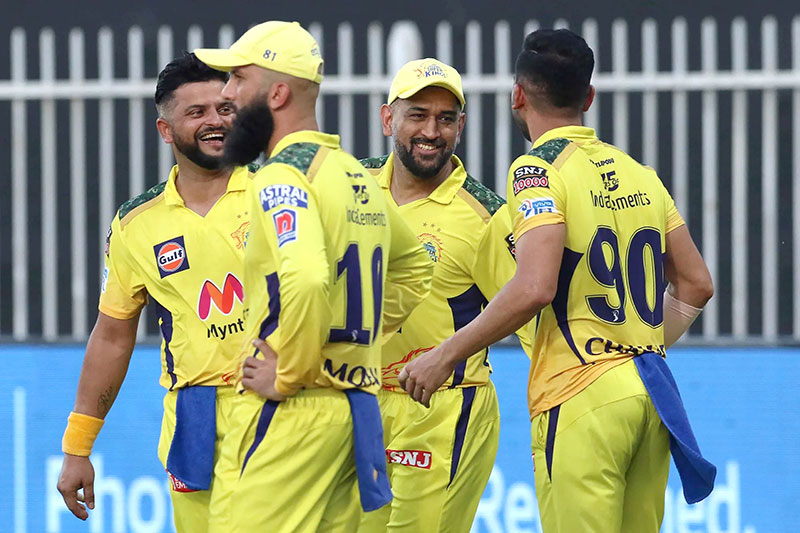 CSK retained their top spot at the points table with 18 points in 11 games while SRH slumped to their ninth loss of the season and have just four points.

.@ChennaiIPL march into the #VIVOIPL Playoffs! 👏 👏

The @msdhoni-led unit beats #SRH & becomes the first team to seal a place in the playoffs. 👌 👌 #VIVOIPL #SRHvCSK

Earlier in the game, Wriddhiman Saha notched up 44 off 46 deliveries but found no support from other SRH top-order as the team lost their first four batters with just 74 runs on the board.

Later, SRH tailenders took the score to a below-par total of 134/7 with contributions of Abhishek Sharma, Abdul Samad (18 runs each) and a late flourish from Rashid Khan, who contributed (17*) down the order.

CSK openers Gaikwad, du Plessis, both in Orange Cap race, gave the start the side wanted in the chase by adding 75 runs for the opening wicket.

Gaikwad and du Plessis matched each other shot for shot after a steady start in the Powerplay by adding 36 runs.

The partnership was broken by Jason Holder, who tricked Gaikwad early into his bat by a change of pace.

Du Plessis continued the good work by adding 38 runs for the second wicket with Moeen Ali as they appeared to take the game away from SRH.

However, the Hyderabad outfit had an opening as Ali (17 off 17) was dismissed by Rashid Khan in the 15th over.

Holder further brought SRH in the game by removing Suresh Raina (2 off 3) and Du Plessis in the next over as CSK felt nervous with two new batsmen in MS Dhoni and Ambati Rayudu at the crease.

The duo, however, chased down the remaining required runs with two balls to spare after Bhuvneswar Kumar 19th over yielded 13 runs; leaving the side just 3 runs to chase in the last over.

Dhoni (14 off 11) scored the winning run with a huge six over the cow corner while Rayudu remained not out at 17 (13) at the other end.