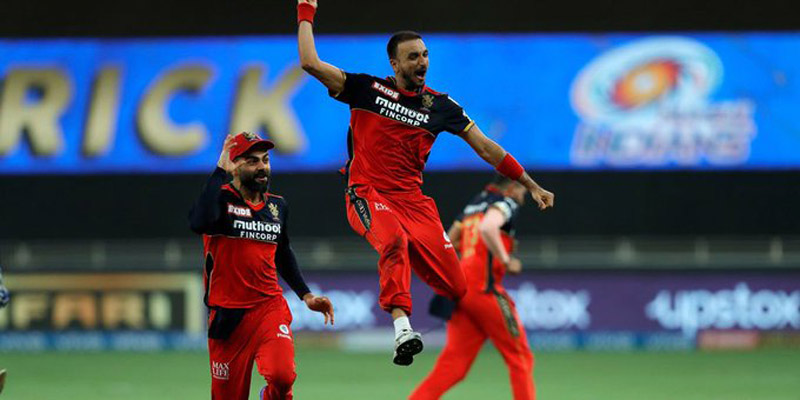 Dubai/UNI: Harshal Patel (4/17) continued his dream run in the IPL 2021 with a hat-trick to power Royal Challengers Bangalore (RCB) to a comprehensive 51-run win over defending champions Mumbai Indians (MI) at Dubai International Stadium in the 39th match of the tournament here on Sunday.

The purple cap-holder’s (23 wickets) hat-trick came in the 17th over when he dismissed Hardik Pandya (3), Kieron Pollard (7), and Rahul Chahar (0) to break MI’s backbone when they needed 58 runs off the last four overs.

His teammate Yuzvendra Chahal also had his share of the limelight as the Indian spinner picked 3/11, helping RCB to bundle out MI for 111 (in 18.1 overs) after they set 163 run target.

Earlier, riding on skipper Virat Kohli's 51 and Glenn Maxwell's 56 run innings, the RCB set a challenging total of 162/6 in the stipulated 20 overs.

This was RCB’s first win in the UAE phase of the tournament and helped them to consolidate the third spot with 12 points. MI remain lowly-sixth with back-to-back third loss.

MI, however, did start on a strong foot in the chase when skipper Rohit Sharma and Quinton de Kock took an aggressive stance after cautiously seeing out the first two overs. Sharma was the first one to fire as he smashed Kyle Jamieson for three back-to-back boundaries as 17 runs yielded off the third over. A similar treatment by the duo was meted out to Daniel Christian in the 5th over, helping MI get past 50 run-mark.

The run flow came to a halt right after the end of the powerplay when leg spinner Chahal removed De Kock for 24 runs (23 balls).

Sharma (43 runs off 28) continued the chase in a short 22-run stand with Ishan Kishan. However, three wickets within a space of 14 runs spiced up the game with seven overs left. Sharma was caught by Devdutt Padikkal to as he failed to clear the cover region off Maxwell’s delivery. Kishan (9 off 12) fell in the next over to Chahal while Suryakumar Yadav could only score 8 runs before being dismissed by Mohammed Siraj.

Patel then sent finishers Hardik and Pollard back to the dugout, followed by Chahar for a duck in the 17th over for his hat-trick.

The MI innings didn’t last long as Chahal and Patel picked the remaining two wickets – Jasprit Bumrah (5 off 6) and Trent Boult (1 off 3)- to put the defending champions out of their misery.

Earlier, RCB saw trouble early with (3/36) removing Paddikal for naught after being sent into bat first.
However, this turned out to be a mere impediment in the powerplay as Kohli took charge of the innings with Srikar Bharat in a 68-run stand.

The duo helped RCB quickly add 48 runs in the powerplay that included four boundaries and three maximums. The partnership was ended by Rahul Chahar, who had Bharat dismissed at 32 runs (24 balls).

Kohli stitched together 50-plus partnership with Glenn Maxwell with the latter being the aggressor in the stand. During Maxwell's 37-ball blazing knock, the Australian smashed six boundaries and three maximums to add pace to RCB’s score.

Kohli, meanwhile, reached his fifty in the 15th over, hitting three 4s and as many 6s, before being outsmarted by an Adam Milne delivery while the RCB scoreboard read 126/3.

Maxwell continued to blast MI bowling including 17 runs off the 18th over bowled by Milne (1/48). MI did manage to do some damage control by giving away just nine runs in the last two overs including three wickets. Bumrah first removed AB de Villiers (11 off 6) and then Maxwell in the 19th over while Trent Boult (1/17) clean bowled Shabaz Ahmed (1 off 3) in the last over.