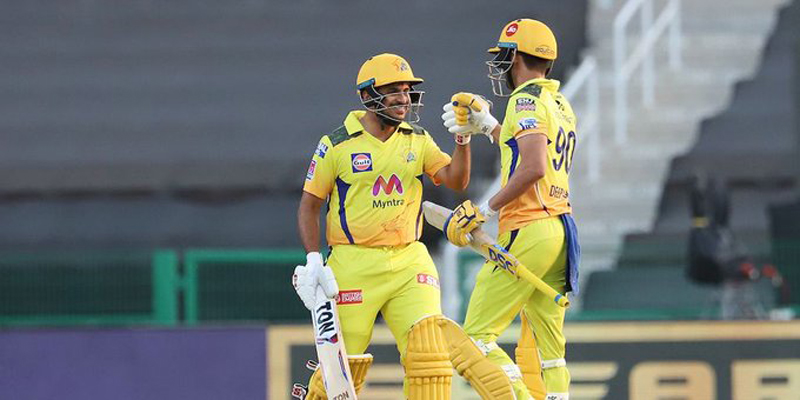 Abu Dhabi/UNI: Chennai Super Kings reclaimed the top spot in the IPL 2021 points table after the MS Dhoni-led side defeated Kolkata Knight Riders in a last-ball thriller here on Sunday.

Chasing 172, CSK needed mere four runs in the last over after Ravindra Jadeja (22* runs off 8 balls) took Prasidh Krishna to the cleaners with two 6s and as many fours in the penultimate over. However, four dot balls, including two wickets, by KKR spinner Sunil Narine (3/41) left tailender Deepak Chahar to grind out that winning single run needed off the last delivery.

The foundation for the win was laid down by openers Ruturaj Gaikwad (40 off 28), Faf du Plessis (43 off 30), who took just eight overs to put 74 runs on the board; smashing seven boundaries and three sixes.

KKR then had their first look-in in the ninth over when Andre Russell (1/28) provided a breakthrough by dismissing Gaikwad.

This, however, had no influence on the run flow as Moeen Ali joined in to do most of the scoring in a 19-ball 28-run partnership with Du Plessis, taking CSK past 100 runs by the 12th over. Right after, Du Plessis fell prey to Krishna.

Ali and Suresh Raina (11 off 7) did add 19 runs for the fourth wicket but things soon turned complex for CSK after three wickets in tandem by KKR.

Ali (32) was first to depart after getting castled by Narine. Four runs later both Raina (run out) and MS Dhoni (1 off 4) were dismissed respectively with 31 runs needed off 15 balls.

However, Krishna (1/41) conceding 22 runs to Jadeja in the last over gave CSK some temporary comfort before Narine complicated things yet again.

Defending just four off the last over, the West Indies spinner first had Sam Curran (4 off 4) dismissed but conceded three runs to Shardul Thakur (3* off 3) right after to leave CSK brink of the win.

The match, however, wasn’t going to end without a final twist in the tale as Narine trapped Jadeja lbw off the penultimate delivery, leaving newly-in Chahar to feel the pressure of finding the winning run.

The tailender did manage to find the winning run by guiding it over the cover fielder for one run.

Earlier batting first, Rahul Tripathi (45 runs off 33 balls) provided the start KKR wanted but the fall of wickets at regular intervals took the momentum away from the side and took swashbuckling knocks from the likes of Nitish Rana (37 off 27), Andre Russell (21 off 15) and Dinesh Karthik (26 off 11) to bring the side back in the game in the death overs.