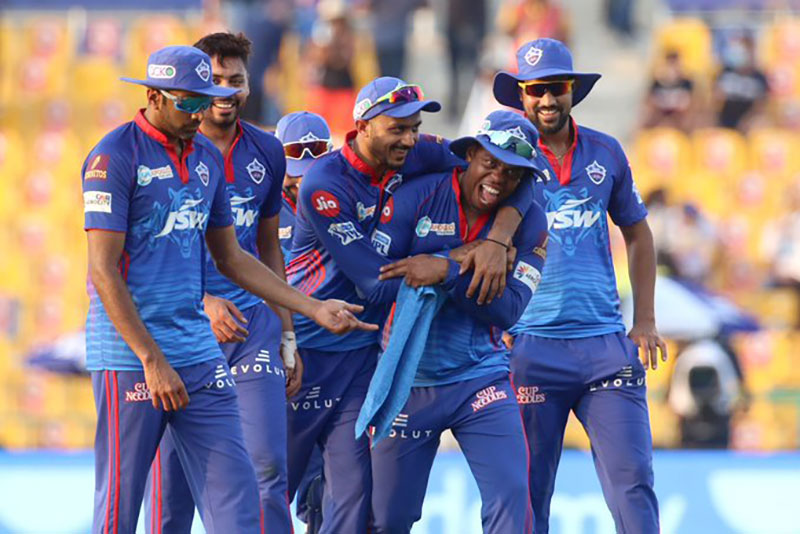 Abu Dhabi/UNI: Delhi Capitals bowlers fired in unison as the team defeated Rajasthan Royals comprehensively by 33 runs in an IPL 2021 match that saw only two RR batsmen clear the fences.

The victory puts Delhi top of the table with 16 points in 10 games while Rajasthan dropped to sixth spot in the table behind Mumbai Indians.

Asked to bat first, Capitals managed to put a modest total of 154/6 on the board through Shreyas Iyer's 43 (32 balls) and Shimron Hetmyer's quickfire 16-ball 28.

Mustafizzur Rahman (2/22) and Chetan Sakariya (2/33) shone with the ball for RR.
RR skipper Sanju Samson did lead from the front in the chase with an affluent 70 not out but lacked support from fellow batsmen.

Chasing 155, Royals top-order faced the wrath of Delhi pace bowling as the powerplay yielded no boundaries, more importantly three wickets, to leave the side in deep trouble at 21/3.

Avesh Khan was the first to strike with the wicket of in-form Liam Livingstone (1 off 3). Anrich Nortje joined the party on the very next ball to remove Yashasvi Jaiswal (5 off 4) before RR could realise they are 6/2.

Spinner R Ashwin then hunted down David Miller (7 off 10) in the fifth over to break RR's backbone inside the first six overs.

Samson tried reviving the chase with a 36-ball 31 partnership for the fourth wicket with Mahipal Lomror. However, the required rate kept on soaring with just 48 runs in the first 10 overs. Lomror (19 off 24) eventually succumbed to the pressure of the asking rate as Kagiso Rabada had him taken at the fine leg.

The fall of wicket continued further as Axar Patel clean bowled Riyan Parag (2 off 7) in the next over with half of the RR batting unit back in the dugout for 55 runs in 12 overs.

Samson though held on to the other end and shot all of seven Royals' boundary at that stage to reach his half century in 39 deliveries.

The skipper, however, continued to lack support with Rahul Tewatia falling prey to Rabada for just 9 runs off 15 balls.

Needing 56 in last three overs, Samson (70* off 55) was never allowed much pace or space to open up arms. Delhi bowlers eventually restricted RR at 121/6 at the end of 20th over.

Earlier, Delhi's former skipper Shreyas Iyer (43 runs off 32), Shimron Hetmyer (28 off 16) and captain Rishabh Pant (24 off 24) did most of the scoring on a patchy pitch of Sheikh Zayed Stadium.

The surface had enough help bowlers as Rajasthan pacers Kartik Tyagi (1/40) and Sakariya kept the Delhi openers Shikhar Dhawan and Prithvi Shaw guessing with their variations. They soon reaped rewards with two wickets inside the powerplay.

Dhawan (8 off 8) was the first to depart after last-match hero Tyagi played him down. Shaw (10 off 12) was next to follow after Sakariya nicely set him up with just 21 runs on the board in 4.1 overs.

Iyer and captain Pant then adopted the traditional approach of settling down first on the slow Abu Dhabi surface with the next four overs yielding just 26 runs.

Once comfortable, the duo used selective aggression to add pace to the scoreboard with 32 runs in the next three overs to take DC to 79 runs in 11 overs.

However, re-introduction of pacer Rahman soon pulled Royals back in the game with the big wicket of Pant (24 off 24) in the next over.

In at No. 5, Hetmyer breathed life back into DC innings with five boundaries in two overs (including three off Tyagi in the 16th over) while Lalit Yadav held on to the other end.