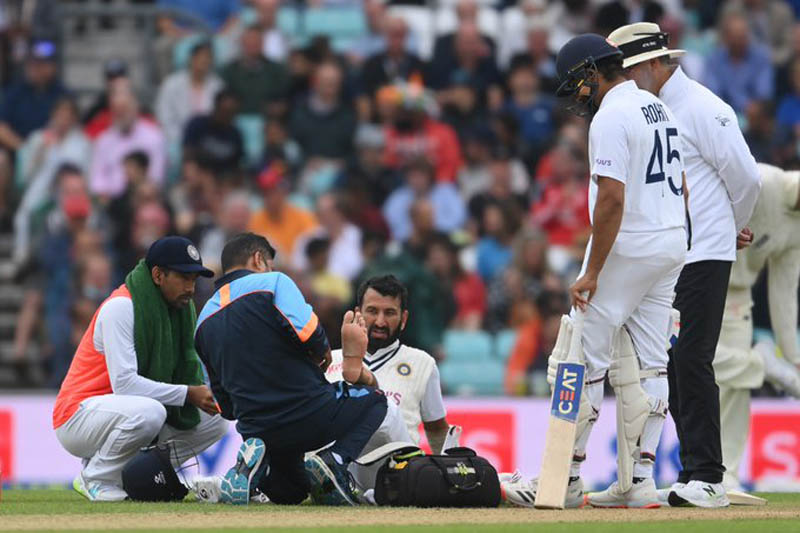 London/UNI: Rory Burns and Haseeb Hameed's unbeaten opening stand took England to 77 for no loss at stumps on day four, chasing 368 in the fourth Test against India, here on Sunday.

After India were bowled out for 466 in their second innings, England made a good start in batting friendly conditions and they ended the day 4 without losing a wicket.

The hosts will go into the final day still needing 291 runs to win the game.

Earlier, Virat Kohli and Ravindra Jadeja got off to a steady start in the morning as the two opening bowlers — Ollie Robinson and James Anderson failed to make any sort of impact.

It was the introduction of Chris Woakes into the attack, which would turn things around for the hosts.

He first trapped Jadeja in front of the stumps on 17, to break the vital partnership. Then, Woakes trapped Ajinkya Rahane in front of his stumps for a duck.

Kohli and Pant would take India's lead past the 200-run mark while taking the score over 300. But they had a mighty task on their hands. After looking well set, India lost the wicket of skipper Kohli to Moeen Ali as he edged a straighter delivery to the first slip.

In the second session, Thakur and Pant embarked on a brilliant partnership that would tire out the English bowlers. Their stand crossed the 100-run mark, and they played some glorious shots.

Thakur in particular looked in brilliant form, carrying on from his run in the first innings. He brought up his third Test half-century, easily swatting away the English pacers.

This led to Joe Root bringing himself in the attack and the decision paid back handsomely, as Thakur edged one to the slips to finally be dismissed after a well-made 60.

Rishabh Pant would also bring up his half-century, his first one of the series, before immediately being caught and bowled by Moeen Ali. But the pair had done their job, ensuring that India's lead had crossed the 300-run mark.

Jasprit Bumrah and Umesh Yadav then added further salt to the English wounds ahead of tea, with their 31-run stand. India ended the session on 445/8, leading the hosts by 346 runs.

Bumrah was dismissed by Woakes in the second over after the break for 24. Yadav added a couple of boundaries to his name before Overton wrapped up India's innings on 466, setting England a target of 368.