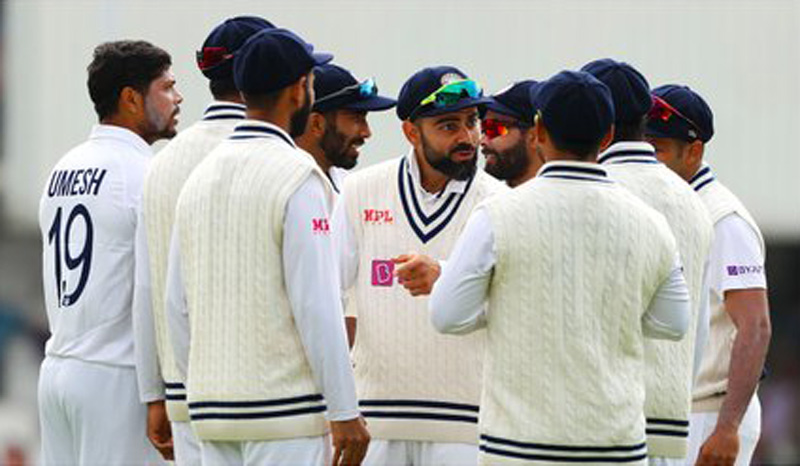 London/UNI: Rohit Sharma and KL Rahul took India to 43/0 at stumps, trailing by 56 runs against England in the fourth Test, here on Friday.

England posted a total of 290 in the first innings and took a 99 runs lead against India.

After the visitors had bowled England out in the first half of the final session, Rohit Sharma got a lifeline early in India's second outing.

He finished the day unbeaten on 20* with KL Rahul keeping him company on 22*. Rohit also completed 15,000 international runs, becoming the eighth India batsman to reach the mark.

Earlier, England resumed the day with Dawid Malan batting on 26* alongside Craig Overton who was on nightwatchman duties. However, Overton’s stay didn’t last long and was dismissed early on day two by Umesh Yadav for 1.

Then, Yadav removed Malan for 31.

Thereafter, Jonny Bairstow and Ollie Pope stitched together a clinical partnership of 89 runs for the sixth wicket. Bairstow scored a steady 37 before Mohammed Siraj produced an inswinging delivery that did Bairstow for leg-before.

Pope continued to show grit to bring England to parity and extend the lead thereon along with Moeen Ali. The two put up a 71-run partnership during which Pope brought up his sixth Test fifty.

On the brink of tea, Ali (35) decided to break the shackles but he got out to Ravindra Jadeja.

Half an hour into the final session, Shardul Thakur claimed the big wicket of Pope, who made a solid 81 from 159 balls. In the next over, Jadeja sent Ollie Robinson back to the pavilion for 5, reducing England to 255/9.

But Woakes remained unperturbed and continued to bat with grit. He kept hitting regular boundaries, adding important runs to England's lead, with Anderson standing firm at the other end.

Woakes hit Bumrah for three fours in one over, handling the new ball with confidence. He raced to his fifty in style with a four, reaching the mark in 58 balls.

But just after one ball, England's innings came to an end as Woakes was run-out for 50.