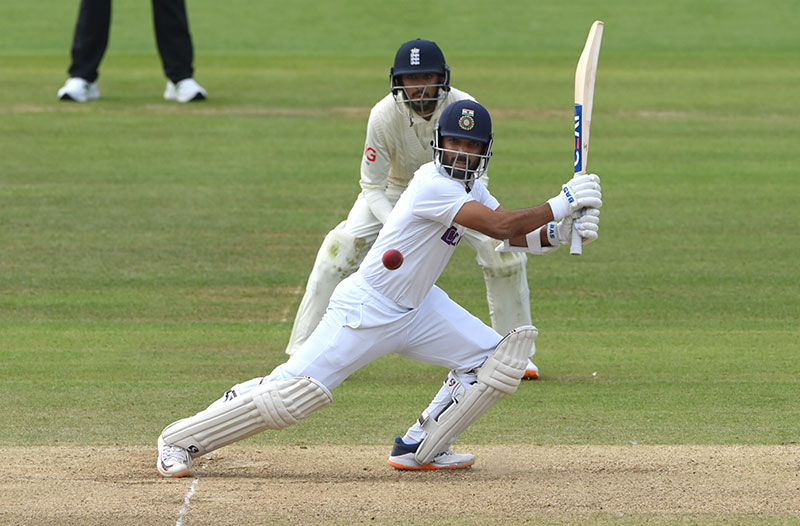 London/UNI: India were 181 for six in their second innings at stumps, taking a 154-run lead on the fourth day of the second Test against England, here on Sunday.

Rishabh Pant and Ishant Sharma were batting on 14 and four respectively when play was called off a bit earlier because of bad light at the Lord's.

In the morning session, Indian openers KL Rahul and Rohit Sharma started the innings on a cautious note. However, England captain Joe Root introduced Mark Wood into the attack and the pacer snared the wicket of the in-form KL Rahul.

The hosts then laid a trap to set up Rohit Sharma to play his favourite pull-shot. Even though Rohit got a six off the first short ball, the same delivery led to his fall for 21 runs after a top-edge was caught by Moeen Ali at deep square leg.

Thereafter, Cheteshwar Pujara and Virat Kohli added 28 runs for the third wicket before Sam Curran dismissed the Indian captain for 20 who edged another one to the keeper.

In the session after lunch, India regained control of the proceedings with Ajinkya Rahane joining Pujara in the middle. The two ensured that the visitors headed into tea without losing any wicket in the session despite the flow of runs having dried down.

The pair continued to show their persistence in the final session, with Rahane bringing up a gritty half-century. Pujara was looking good to reach the landmark as well, but Wood struck again with a well-executed delivery to dismiss him for 45.

Rahane followed suit soon, with Moeen Ali finally reaping the rewards of his tight spell, with the Indian vice-captain walking back to the pavilion after a knock of 58.

Ravindra Jadeja, who came to bat next, could not make much of a contribution with the bat, with Ali dismissing him. With the lights fading, the umpires called stumps with India leading by 154 runs.