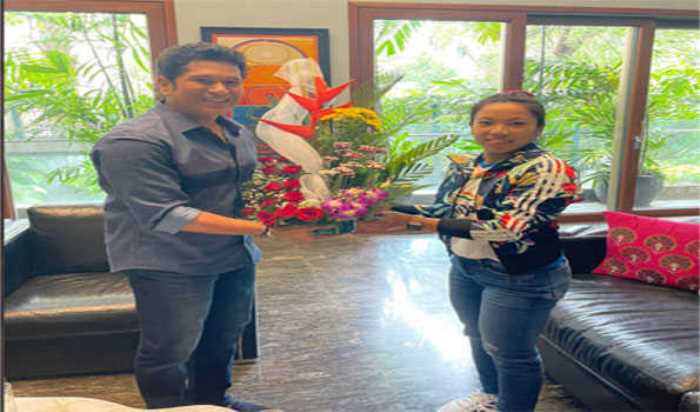 Chanu became the first woman from the country to clinch the silver medal last month at Olympics in weightlifting.

She, is the only second Indian after weightlifter Karnam Malleswari to bag a medal in two decades. Malleswari had won bronze way back in 2000 Sydney Olympics.

Both Chanu and Tendulkar took to twitter to show their mutual appreciation for each other and how much they enjoyed the meeting.

"Loved meeting @sachin_rt Sir this morning! His words of wisdom & motivation shall always stay with me. Really inspired," Chanu tweeted.

"Equally happy to meet you this morning, @mirabai_chanu! It was wonderful talking to you about your inspiring journey from Manipur to Tokyo. You've got places to go in the coming years, keep working hard." Tendulkar replied to Chanu just a couple of hours later.

The diminutive iron lady from Manipur lifted a total of 202kg (87kg+115kg) in Tokyo to better Karnam Malleswari's bronze in the 2000 Sydney Olympics.