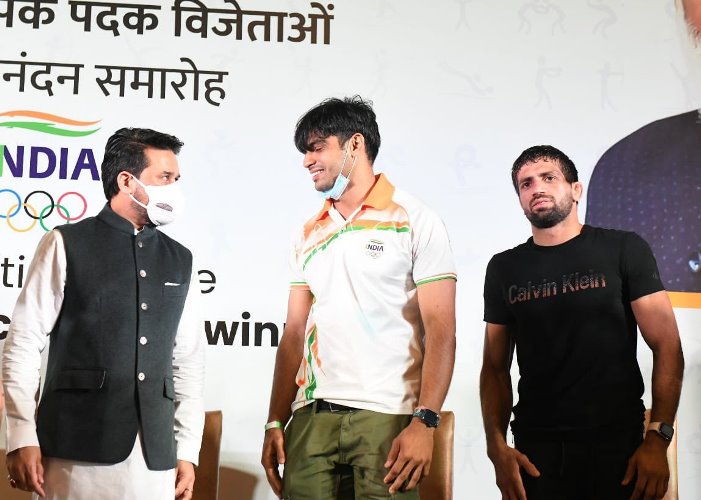 Neeraj Chopra, among other medalists return home, greeted by crowd with honour

The crowd welcomed their heroes outside the airport who put up great show at the Olympics.

The athletes were welcomed by a Sports Authority of India delegation headed by its Director General Sandeep Pradhan. Athletics Federation of India head Adille Sumariwala also accompanied him.

The athletes were garlanded and presented with bouquets on arrival and were applauded by the airport staff as they made their way out to utter chaos due to the huge presence of supporters and media personnel.

However, social distancing was not followed as people became excited to see their heroes.

India achieved their best medal at the Tokyo Olympics 2020 standing at 48th position surpassing their London Olympics medal count of six with one gold, two silver and four bronze in Tokyo.

Chopra, was the only gold medallist for Indian contingent during the Olympics while others like weightlifter Mirabai Chanu and wrestler Ravi Kumar Dahiya went for silver. Boxer Lovlina Borgohain, shuttler PV Sindhu, men's hockey team and wrestler Bajrang Punia settled for bronze.

Of the medal winners, Chanu and Sindhu had returned to the country earlier after the completion of their events as COVID-19 protocols required athletes to leave Tokyo within 48 hours of the medal ceremony.

India had sent a 228-strong contingent for the Games, including more than 120 athletes.

This was the country's biggest ever presence at the quadrennial showpiece which took place after a delay of one year due to the pandemic.