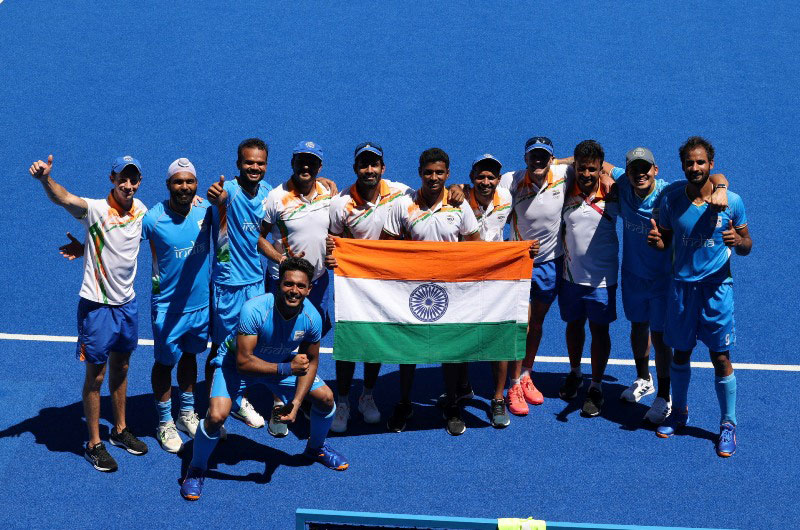 Tokyo/IBNS:  Indian men’s hockey team finally broke the jinx by winning a medal in the Olympics after more than four decades beating strong contender Germany 5-4  in a pulsating play off match for the bronze at Tokyo Thursday.

After losing to gold medal winners Belgium 2-5 in the semi final, India did not lose its morale and displayed fine form to beat Germany coming from behind twice.

While the Indians utilized most of the opportunities which came in their way, their defense led by keeper P R Sreejesh displayed terrific form to keep their forts intact during the last twelve minutes with the score line reading 5-4 in favor  of India.

Sreejesh also came up with a fine save off a penalty corner attempt by Germany just in the dying moment to win the bronze for the country after  41 years.

Stung by the reverse India did not lose heart and after surviving three consecutive penalty corner attempts in the 15th minute, equalized two minutes into the second quarter with Simranjeet Singh finding the target off Nilkanta Sharma (1 - 1).

The second quarter saw both the teams making alternate raids and scoring as many as a total five goals. After the equalizer by India, they snatched the lead again. After Niklus Wellen made it (1 - 2) in the 24th minute, Benedikt Furk buttressed the lead finding the target one  minute later ( 1- 3 ) .

In spite of trailing by a margin of two goals, never say Indians went attacking the German fort and drew level soon.

Hardik Singh smartly made it home after ball came rebound off German custo following a penalty corner taken by Rupinder Pal Singh in the 27th Minute (2 – 3) while a couple of minutes later drag flicker Harmanpreet Singh converted a penalty corner to restore Parity (3 -  3).

Inspired after drawing leveling the score, India combined well to score two more goals to force a two – goal lead. While Rupinder Pal Singh did not make a mistake to  beat German keeper converting a penalty stroke one minute after the start of third quarter( 4- 3 ), Simranjit Singh completed the tally for India in the 34th minute.

Germany after conceding their fifth goal put a series of raids resulting  in a reducer scored by Lukas Windfeder (4 – 5)  in the 48th minute.

During the last three minutes, Germany became desperate to draw level and brought in an off field player in place of their goalkeeper. But Indian deep defense kept their cool and thwarted all the German attacks to add a bright new chapter in the history of Indian Hockey.