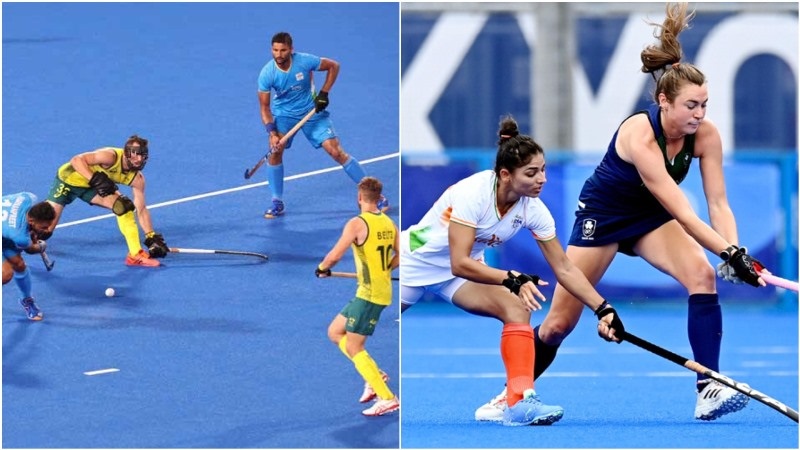 Tokyo/IBNS: Indian women hockey team kept their hope for a berth in the knock-out stage alive defeating a higher ranked Ireland 1-0  while their male counterparts, who have already ensured their place in the quarter finals, also registered a convincing 5-3 win against hosts Japan in their last group league match at the Tokyo Olympics on Friday.

Requiring a win to remain in the fray for a place in the knock-out stage, Indian eves went all out from the start and forced a series of raids without any success except once. Indian women forced as many as 14 penalty corners all of which proved abortive.

India finally found the target three minutes from close through Navneet Kaur ( 1-0).  For a slot in the quarter finals, they will have to earn full points against South Africa in their last league outing to be held Saturday.

In the men’s pool “A” league match India  maintained an edge against the hosts all through. Having already assured their place in the quarter finals, Indian men appeared a bit complacent. Beside sending inaccurate passes, their defense also looked vulnerable whenever  there was any pressure.

India went ahead  through Harmanpreest Singh who converted a  penalty corner in the 13th minute while Gujrant Singh but tressed the lead  ( 2-0) four minutes later. The hosts struck back and drew level through K Tanaka ( 2-1 ) and K Watanabe ( 2 -2 ) in the 19th and 33rd minute respectively which was, however, short lived.

India snatched the lead again with Shamsher Singh finding the target in the 33rd minute ( 3 – 2 ). After Nilkanta Sharma made it 4-2 scoring in the 51st minute Gujrant Singh found the target again five minutes later ( 5-2). Murata reduced the margin for the hosts finding the target a minute before the hooter ( 5-3).

In the six – team  pool “A”, India are now at the second spot with four wins and a defeat while Australia who won four matches and drew once are at the top after the end of their  pool “A league fixtures.