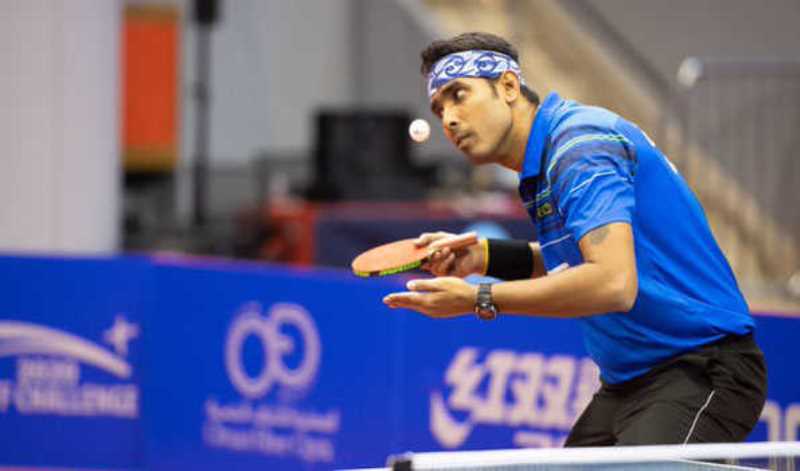 Kolkata/UNI: A. Sharath Kamal, the last of Indian paddlers at the Games, bowed out with his head held high at the Tokyo Metropolitan Gymnasium on Tuesday.

During the entire 46 minutes he spent at Table No. 2 in his third-round men’s singles match, the Indian showed his versatility, perseverance and dignity, besides making the three-time Olympic and world champion, Ma Long, sweat considerably.

Today was the day when everything worked for him, his backhand, his forehand, his pushes and the backspins.

He was also able to flummox Ma with a few crosscourt and down-the-line winners. Yes, all up to a point, Table Tennis Federation of India said in a media release.

It was a tactical sort of round of 32 matches. The Chinese, who received a couple of byes, was playing his first match.

The 39-year-old veteran knew that he needed to put some pressure to overcome a player of Ma’s calibre.

Without showing any rustiness, Ma raced to 4-1 in the first game. However, Sharath pulled it to level 5-5. Just as it was getting too close for his comfort, Ma arrested Sharath’s surge, taking the game

11-7. After 3-3 in the second, Sharath made it 7-3, winning six consecutive points. But, Ma came back strong and made it 7-8. From a five-point lead, Sharath was staring down at the barrel.

A timeout call from his coach, Soumyadeep Roy, at this juncture did not yield the desired result immediately as a superb rally helped Ma levelling the score 8-8 when he landed the ball down the line on his backhand.

But Sharath turned his magic on to win three successive points to win 11-8. It was a big boost for the Indian, who made the Chinese sweat a bit.

In the next, Sharath’s clever spinning backhand enabled him to take a 4-2 lead. But the class of Ma was on display as the second seed levelled the score and raced ahead to 7-8 and three consecutive points gave him two game points advantage.

However, Sharath made it 10-10 with successive backhand spins, and it was 11-11 soon after.

Ma won his next point to go up 12-11 and called for a timeout, surprising one and all. It was a rare sight, even for his teammates. Returning to the table, he finished the point with a powerful forehand to lead 2-1.

Relieved as he was, Ma raced to a 6-0 lead in the fourth before letting Sharath take his first point.

But then Ma never looked back after that, first sewing up the game quickly and taking the next one, too, with a similar score of 11-4.

As long as he lasted, Sharath looked good, probably playing the best match of his life. It was unfortunate that he missed his opportunity in the third game, TTIF said.

Sharath did admit that. “Yes, it could have been a different match if I were able to convert that game. But it was not to be,” he said.

Would a different draw have helped him in some way? “Yes, indeed. But for Ma, and the way I played today would have landed me in the quarters,” he said.

In the end, he was happy to have punched above his weight, turning this Olympics into his best.

He also reasoned out that he was in a better frame of mind and shape.

“The age may not be on my side. Yet, I would say this was undoubtedly my best outing, andI could learn so much.”

Would he have another shot at the Games, say, in Paris? After musing over the question for a few seconds, he carefully worded his answer. “I would like to break things down to every six months and take stock of the situation to assess myself. That’s how I prepared physically and mentally after the 2018 CWG and Asian Games. It will be no different this time. But all my well-wishers do want me to carry on. Let me go back home and have a word with my family, especially my wife."

"Today’s performance has certainly pushed my desire to continue until Paris. But let’s see,” he concluded.