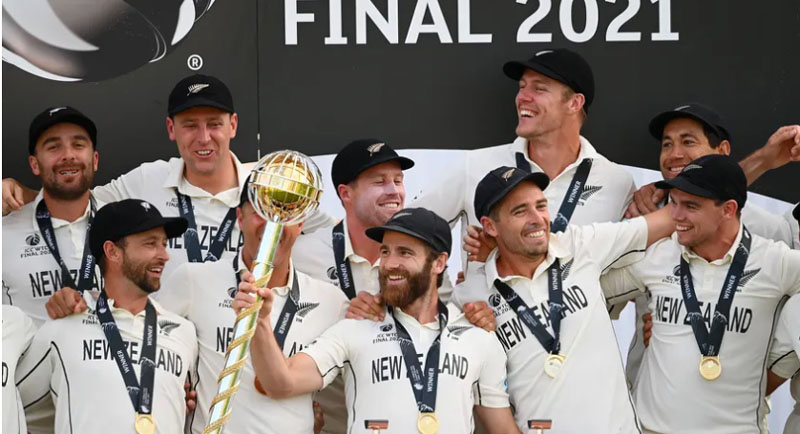 Dubai: The International Cricket Council (ICC) congratulates the Black Caps on winning the inaugural ICC World Test Championship beating India in a riveting final at the Hampshire Bowl in Southampton.

It is the first major ICC trophy for the New Zealand cricket team since 2000 and an incredibly tight game saw New Zealand bowl out India for 170 in the second innings, leaving them 139 to chase for victory.

It is the first major ICC trophy for the New Zealand cricket team since 2000 and an incredibly tight game saw New Zealand bowl out India for 170 in the second innings, leaving them 139 to chase for victory.

Geoff Allardice, ICC Acting CEO said, “I would like to congratulate the first ever World Test Champions, the Black Caps who displayed the skill and temperament required to be the best Test team in the world. I would also like to congratulate the Indian team, who performed so consistently to qualify for the Final and came so close to winning it. Both teams showed their quality and it was a simply outstanding game of Test cricket that will live long in the memories of cricket fans around the world, also played in a great spirit that highlighted the mutual respect between the teams."

“Throughout the two year World Test Championship both Kane and Virat made no secret of their desire to win the Test Mace and that was clearly evident over the last six days. The quality of the play was befitting of the two best Test teams in the world and it was an enthralling game," he said.

“The conclusion of the first edition of the World Test Championship is a special moment for our sport as this is an event that has been so long in the making. But the last two years have clearly demonstrated the importance of context in Test cricket and I’m already looking forward to the second edition starting with England v India in a little over a month," he said.

“I would also like to thank everyone involved in staging this pinnacle event in the making for years, including the ground staff at the Hampshire Bowl, the staff at the ECB, BCCI and NZC, our commentators and media experts and the passionate fans who attended the match, without whom, such a befitting tribute to Test cricket would not have been possible," he said.