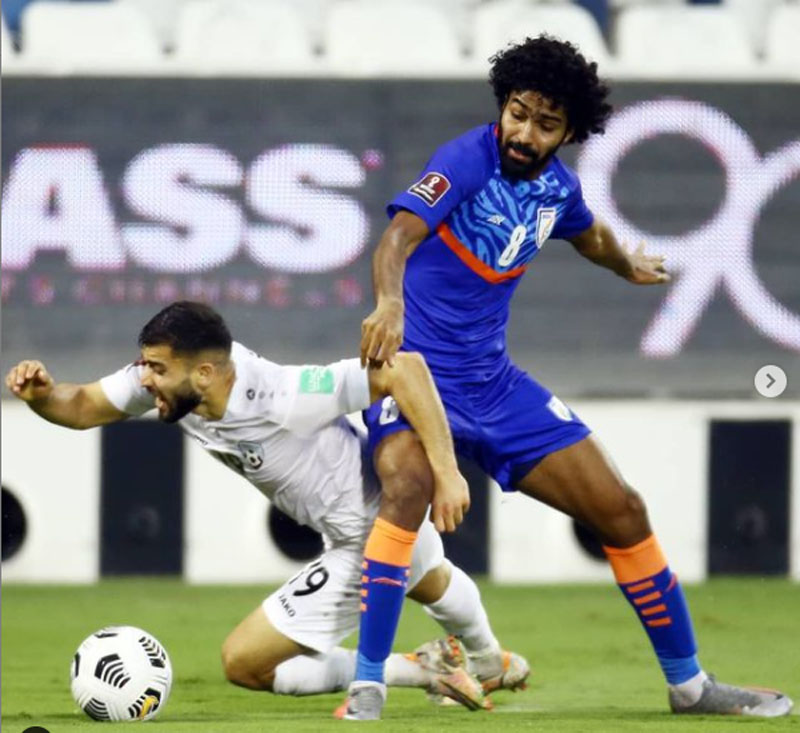 Football, though a very popular sport in a cricket-mad region, has still a long way to reach international standards in South Asia, with all the eight countries from the region bowing out in the FIFA World Cup qualifiers – two of them in the first round, and the others in the second.

Twice Asian Games champions India, led by 36-year-old Sunil Chhetri, was the only South Asian side to manage a third-place finish in round two of the qualifiers to earn a direct spot in the third round of AFC Asian Cup qualifiers. Five other teams – Maldives, Sri Lanka, Nepal, Afghanistan and Bangladesh – will have to go through the play-off path in a bid to qualify for the Asian Cup group stage.

Pakistan and Bhutan had been knocked out in the very first round of the World Cup qualifiers which were played in mid-2019.

Bhutan had gone down to Guam and Pakistan was vanquished by Cambodia in the play-off for entry into the second round of double-headers, which have stretched from mid-September 2019 to June 15 this year due to a big break in between following the Covid 19 pandemic.

In round 2 of the qualifiers, three teams from the region – India, Afghanistan and Bangladesh – featured in group E.

India and Afghanistan played out a 1-1 draw in their last group fixture on Tuesday in Doha, Qatar to take the third and fourth place, pushing Bangladesh to fifth and last slot.

Maldives, Nepal and Sri Lanka finished fourth in Group A, B and H respectively.

The Maldives could log seven points in their eight group games, courtesy two wins against Guam and a drawn encounter with the Philippines. They suffered humiliating 0-5 losses in both the league games opposite China to be placed only above wooden spooners Guam. War-torn Syria came up with an admirable performance to top the group and advance to round three of the World Cup qualifiers.

Nepal secured six points in their eight outings, their two wins coming against lackluster Chinese Taipei (Taiwan). Nepal was crushed 0-7 by Kuwait in a game played in Kuwait City before formidable Australia handed them a 5-0 drubbing in Canberra in pre-pandemic times.

Sri Lanka came up with a pathetic show, losing all their six games and conceding a whopping 23 goals, reaching their lowest ebb in a 0-8 pounding by South Korea. The group was reduced to a four-horse race with North Korea opting out.

The Sri Lankans managed to score only twice, in a continuation of the insipid display of South Asian soccer teams on the world stage for decades. The last notable performance has come from India - once with a good national side with skillful ball players -  which got the bronze in the Asian Games 51 years back. None of the teams from the region feature in the top 100 of FIFA rankings – India lead the South Asian pack way down at 105, with Sri Lanka placed 204 among 210 nations.

In the recent Group E of the round two qualifiers at Jassim bin Hamad Stadium in Doha, Qatar, an ultra-defensive India garnered seven points, one more than Afghanistan, while Bangladesh could scoop up only two.

Chhetri’s display was perhaps the high watermark of India’s performance, as the popular "Captain Fantastic", came up with a superb double strike to fashion a 2-0 win against Bangladesh, which also ended India’s long winless show. Chhetri is now the third-highest international goal-getter among active players, after Cristiano Ronaldo and Ali Mabkhout, and 12th-highest of all time.

He is both the most-capped player and all-time top scorer for India. Chhetri is now just one short of entering the all-time top-10 list of goal-scorers and needs to strike the net thrice to equal the iconic Pele of Brazil in terms of the numbers of goals scored in international fixtures.

Afghanistan, a nation ravaged by civil war but where football has been very popular though cricket is catching up fast, launched their campaign on the wrong note with a 0-6 loss to Qatar, but made a strong comeback with a 1-0 win over Bangladesh, before being blanked out 0-3 by Oman. They drew both their matches 1-1 with India, lost by a solitary goal against Qatar and 1-2 to Oman.  In between, they finished 1-1 with Bangladesh in the return leg.

A big plus for the Afghanistan team is that the bulk of their current national players ply their trade outside the country - mostly in lower division clubs in countries like Germany, Netherlands and Sweden. And some even play in the USA and Australia. Speedy and sturdy, the young side has good quality players and the potential to come up with better performances in the not-too-distant future.

Bangladesh, where football is also popular, put up a poor show, suffering six defeats in eight matches, including a 0-5 drubbing against group champions Qatar.