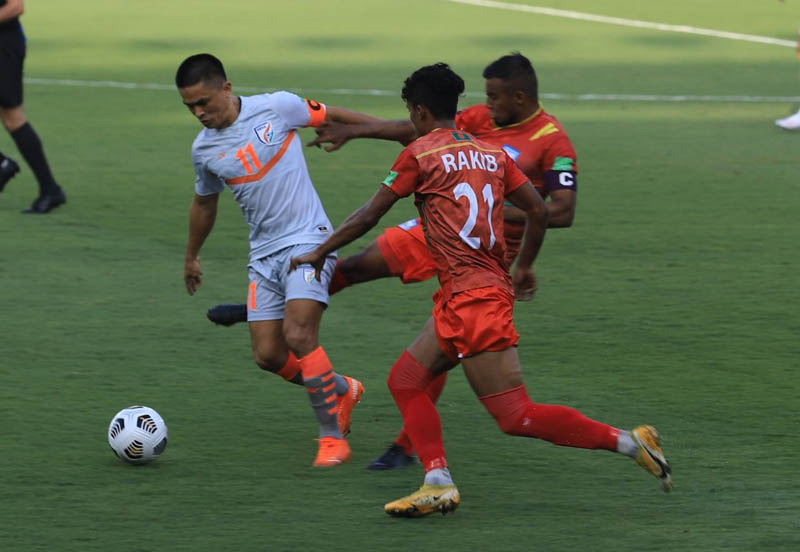 With their first victory in 11 matches, the Blue Tigers now have six points from seven matches in Group E and kept their hopes alive of guaranteeing an automatic berth in the third round of the AFC 2023 Asian Cup qualifiers.

India will next play Afghanistan in their last group league match on June 15.

Despite dominating the majority of the first half, India were unable to break down the gutsy Bangladesh defence. Chinglensana Singh came close to opening the scoreline in the 35th minute but his header was cleared off the line.

In the second half, India upped the ante and finally broke the deadlock through their captain Sunil Chhetri in the 79th minute, who connected with Ashique Kuruniyan’s cross from an acute angle to send the ball back across Bangladesh goalkeeper Anisur Rahman.

Thereafter, Bangladesh began to throw bodies forward in search of the equaliser, but were often thwarted by the Indian defence. Jamal Bhuyian went into the referee’s books a minute after Chhetri’s goal, for a foul on Brandon Fernandes.

Stimac made a couple of tactical changes in order to hold on to the lead in added time, as Pronay Halder and Adil Khan replaced Chinglensana Singh and Brandon Fernandes, respectively.

However, captain Sunil Chhetri sealed the three points for the Blue Tigers, as he collected a pass from the left by Suresh, outside the Bangladesh area, and curled it into the back of the net in added time.