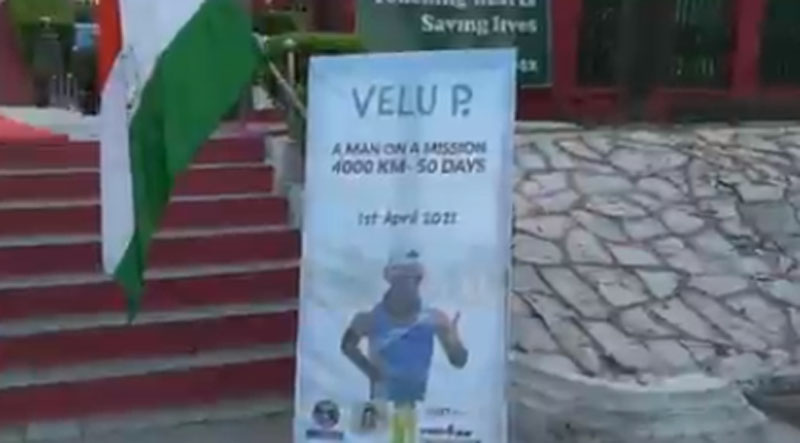 Srinagar: An Indian Army sportsperson on Thursday commenced a mission to run 4000 kilometres, ranging between Kashmir to Kanyakumari, in a period of 50 days, media reports said.

Velu P started off the long-distance run with the Indian Army proudly flagging off him from Srinagar, reports ANI.

He is reportedly planning to run the entire distance by crossing crucial cities like Delhi, Indore, Mumbai, and Bangalore.

Speaking to ANI, Velu said, “I am in the business of running for 15 years. For five years I have been participating for the India team in Ultramarathon, I achieved the Limca record for a 1600 km run the last year. This year I have set a target to get into the Guinness Book of Records by covering 4000 km from Kashmir to Kanyakumari in 50 days. In fact, I want to complete the run in 47 days to 48 days though I have set a target of 50”.

He further added, “One of my teammate in the Indian team, LL Meena passed away, to whom I want to dedicate this long-distance run”.

#ChinarCorps wishes Naik Velu P all the very best for attempting Guinness record run from #Kashmir to Kanyakumari 4300 km in less than 50 days starting from today. Last year he ran 1600 km in 17 days setting up Asian record. We wish him good fortune in his new mission.@adgpi pic.twitter.com/dqsfyFTAvS