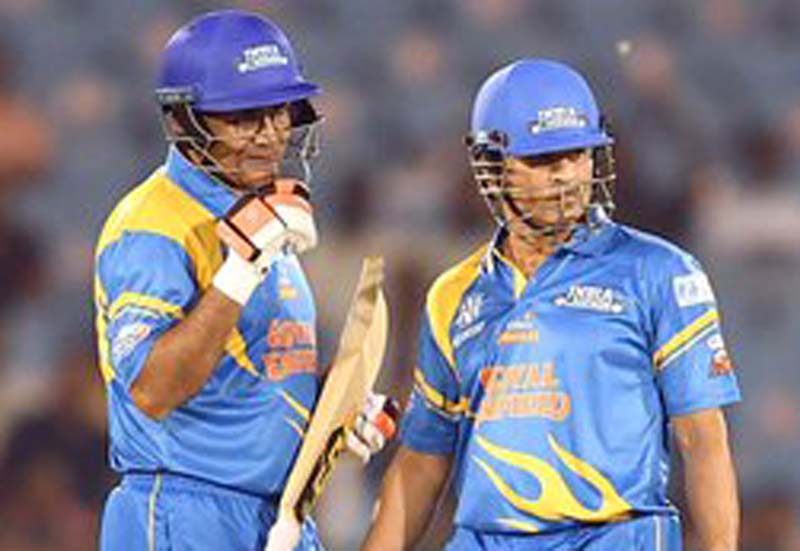 Raipur clash: India Legends go down to England Legends in a close match

Chasing a target of 189 runs to win, the match went down the wire after the top order collapsed as all-rounder Irfan Pathan and Manpreet Singh Gony went hammer and tongs in the last two overs, but fell short by seven runs.

Needing 38 in the last over, Gony hit 19 runs with two sixes and a boundary to Chris Tremlett in the penultimate over.

However, the Indians could manage only 12 runs in the last over.

England captain Kevin Pietersen was the star of the match with an entertaining knock of 75 runs that helped them register their second win of the tournament.

From India, Irfan was the star of Indian batting line-up after the top-order failed to get a good start.

Meanwhile, Yuvraj Singh got a good start but couldn't capitalise on it.

Seven down for 119, the match looked almost gone for India, but Irfan and Gony miraculously brought the home team back into the game with a 63-run partnership.

But in the end, 189 was too stiff a target for India to chase it down.

Earlier, England Legends captain Kevin Pietersen slammed a quick-fire half century to help his team post a big total of 188/7 in 20 overs.

For India, off-spinner Yusuf Pathan (3/28) took the most wickets while pacers Irfan and Munaf Patel two wickets each.

After being put into bat first by India, the visitors put up a fine batting display, and they were aided by the hosts' sloppy fielding in the outfield.

Pietersen blasted a 37-ball 75 that included six boundaries and five huge sixes. Apart from his individual performance, the English captain was involved in an 82-run stand for the second wicket with Darren Maddy that saw them give India a challenging total.

His partner and No.3 Maddy ably supported Pietersen with 29, coming off 27 balls and three boundaries.

The 40-year old was ruthless in his batting and never spared anyone. Left-arm spinner Pragyan Ojha bore the brunt of his ire in the second over itself when he was hit for two sixes and four. Yuvraj Singh, too, received few pastings from Pietersen as the latter raced to his half century in just 17 balls.

Pietersen got a life, too, on 64 when he slogged Irfan Pathan to long-on, but Manpreet Singh Gony failed to grab the opportunity.

Later, Irfan got him two overs later with a slow bouncer that took Pietersen’s edge to wicket-keeper Naman Ojha while going for a loose shot.

But the damage was mostly done and England needed only cameos from Gavin Hamilton (15) and Chris Schofield (15) to take them to a respectable total.