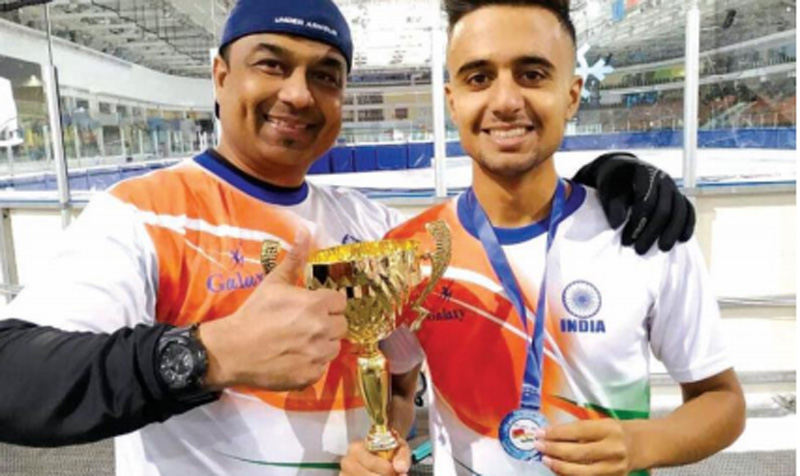 Srinagar: In the winter of 2014, Basharat Ahad Mir, barely 12 then, would pedal 50 odd kilometres from his home in Parimpora on Srinagar outskirts all the way to winter resort Gulmarg in north Kashmir’s Baramulla district to practice ice-skating there in sub-zero temperatures.

Seven years down the line, Mir has emerged as the first Kashmiri to represent India at international level in ice skating at the young age of 18, thanks to his unwavering passion for the sport.

Mir was a part of the four-member team, which won the International Skating Union trophy in Belarus in the year 2019. Born and raised in Srinagar, Mir did his schooling from Burn Hall School in the city.

Although he has actively participated in other sports including cycling, roller skating and even won medals both at state and national level, Mir embraced ice skating as a full time profession given its Olympics prospect.

“I am a self-taught ice-skater. There was no one here in Kashmir who would teach me about the game. It was only after I failed in a few events and competitions, I was pushed to learn things from the scratch. I took the help of the Internet and studied the game very well,” he recalled.

As for his mother, Mumtaza, she attributes Mir’s success to his hard work and dedication.

“But, what kept me pushing was my love for the particular sport and the dream of competing with international ice skaters,” he said.

The young athlete’s perseverance and resolute temperament finally paid off when he was invited for trials in New Delhi.

But, again, it was never going to be easy for Mir to make it to the final selection list as other players had taken professional coaching and had high quality equipment.

To make things worse, the equipment he had taken on rent from Gulmarg was not up to the mark and the blades in particular were rusted.

Somehow, he took part in the trials but was low on confidence and uncertain about his selection. Basharat decided to return to Kashmir soon after the trials ended, but as he was about to board a flight to Srinagar, he got a surprise call, which lifted the spirits.

“You have been selected for Europe”, informed the caller on the other side of the line. Mir did not trust the caller and hung up thinking somebody was playing a prank on him.

But the person called him a second time and assured him that it was an official call and he had been indeed selected for the international ice skating event.

“It was no less than a miracle for me. I called my mother at once to share the good news. She did not believe me at the beginning, but was overwhelmed with joy when I assured her about it”, recalled Mir.

Although the selection for the international event was a turning point in his career, the familiar financial challenge persisted as he needed someone to sponsor him and cover all his expenses while his family was not in a position to bear the expenses.

He expressed gratitude to DC Srinagar and his school for helping him achieve his dream.

But before the homesickness could take a toll on his performance, Mir remained focused and gave his best in the competition, which helped the team to win the Belarus event.

No matter Mir’s family could not be in touch with him during the most important event of his career, their support has been unwavering throughout his life.

“My family has supported me a lot. My parents have sacrificed their whole life for my career and dreams. Being an elder son of my parents, I have a lot of responsibilities. I want to do everything that makes my parents happy in any situation,” he said.

“He never stopped even though he failed many times. At such a young age, he has won around 104 events so far. He was gifted a professional cycle worth Rs 1 lakh in 2016 by his school for his excellence in sports. All this proves how dedicated and hardworking he has been towards his goals.

He has always made us proud and we hope he will continue to do it in future,” she said while speaking to Greater Kashmir.

He urged the J&K government to fully exploit the natural slopes of Gulmarg saying Kashmir was the best place for winter sports which had the potential to produce Olympic players in the field.

“Sports infrastructure in Kashmir has improved a lot but more needs to be done. Our young players have exhibited their talent on every platform, they just need exposure and proper coaching,” Mir added.