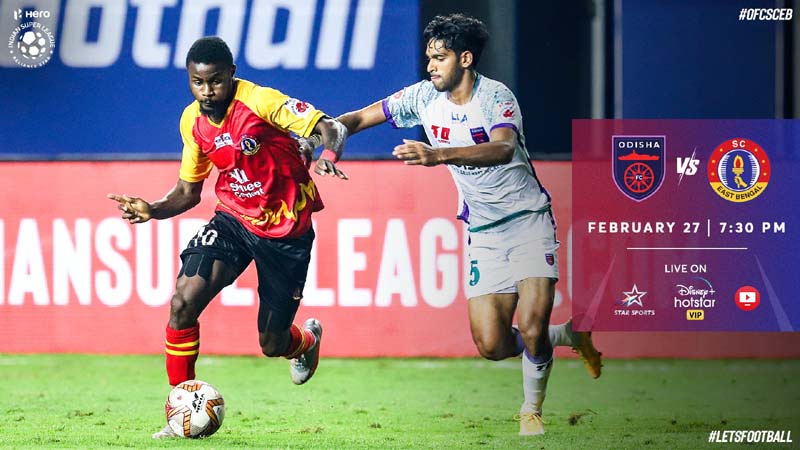 ISL: East Bengal and Odisha look to end season on a high

Goa/IBNS: Both SC East Bengal and Odisha FC will look to end their Hero Indian Super League seasons on a high when they face each other at the GMC Stadium in Bambolim, here Saturday.

Neither team have had campaigns to write home about. While Odisha lie at the very bottom of the table, East Bengal haven't fared much better and are ninth. However, ending the season with a convincing win could give some relief to both sets of long-suffering supporters.

Robbie Fowler's side were always pegged down by the inability of their forwards to convert possession into goals. Bright Enobakhare remains the only one of their strikers to have netted this season and SCEB lie at the very bottom of the goals scored list. The club was also let down by the failure of their Indian forwards to fire. Despite boasting big names like Jeje Lalpekhlua, CK Vineeth and Balwant Singh, Fowler managed to get zero shots on target from the trio.

Odisha have had similar woes throughout the season. Except for Diego Mauricio, no other player stepped up in the goalscoring department. Mauricio was responsible for 57 percent of the goals that his team scored all season.

Odisha coach Steven Dias though believes that his team will learn from their mistakes and come back stronger in the next season.

“When you have a bad season there is always good to learn so many things out of this bad season. That’s what we are all doing. This season isn’t that good for us but there are so many things to learn from this season so we can get better next season,” he said.

Odisha's winless run now stands at ten games and they have also lost the most games and kept the least clean sheets. But despite the match featuring two teams who have nothing to play for but pride, Dias feels that both sets of players will not be short of motivation.

“They also didn’t have a good season like us,” Dias said. “I think they will also come to win this match, we also want to win this match so we can end on a better note. I am trying to keep the boys motivated in training sessions, in the meetings. They look ready, we are ready. Hopefully, it’s going to be a very good match because both teams will look for a win to end on a good note. We will give our best.