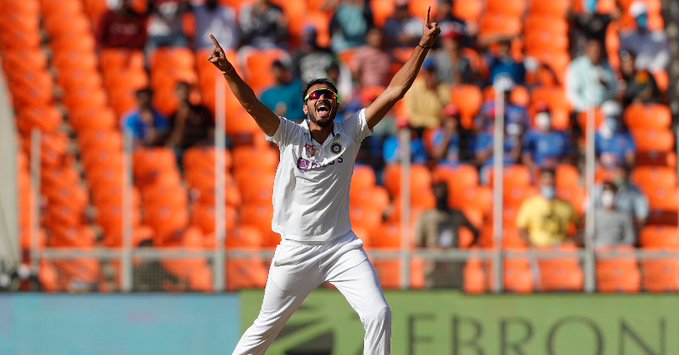 Ahmedabad/UNI: Left-arm spinner Axar Patel starred with the ball as India thrashed England by 10 wickets in the day-night third test, to take 2-1 series lead in the four match series and boost their chances of cementing a place in the ICC World Test Championship final, here on Thursday.

Axar Patel claimed 11 wickets in the match and R Ashwin became only the fourth Indian to reach 400 Test wickets as India bundled England out for 81 in their second innings, giving themselves a target of 49.

India chased down the paltry target of 49 runs in 10.1 overs to knock England out of the race to qualify for the inaugural ICC World Test Championship final. Rohit Sharma remained unbeaten on 25, finishing the match with a six, while Shubman Gill scored 15 not out in the chase.

The day began with India resuming their first innings on 99/3, trailing England by 13 runs. However, things didn't go according to plan for India as England spinners Joe Root and Jack Leach orchestrated a well laid collapse for the hosts.

Jack Leach, England's only recognised spinner in the playing XI, sent back Rahane and Rohit to nullify India's advantage. The dangerous Rishabh Pant, who could have taken the pitch out of the equation with his adventurous strokeplay, fell in the very next over, when England captain Joe Root brought himself on.

Root built on that wicket to return his best ever bowling figures. He ran through the tail, dismissing Washington Sundar (0), Axar Patel (0), Jasprit Bumrah (1) and eventually Ashwin (17) to claim a phenomenal 5/8. All the while, Ashwin and Ishant Sharma, who was unbeaten on 10*, had boosted India’s lead to 33.

England had fought their way back into contention in the match, but unfortunately, their batsmen couldn’t capitalise.

Axar opened the bowling in the second innings, and had England reduced to 0/2 in an eventful first three balls. He cleaned up Zak Crawley with the first ball, and dished out the same treatment to Jonny Bairstow with his third ball, after the batsman overturned his lbw dismissal on the second ball.

Dom Sibley looked to grind his way through, but missed a sweep and was caught behind, his dismissal upheld despite a review. Root and Ben Stokes then briefly resisted India, putting on a 31-run stand for the fourth wicket, with Root having a dismissal overturned on review en route.

Their partnership helped England take the lead, but Ashwin came in to break the stand with the one that straightened and rammed into Stokes’ pads. The visitors lost six wickets for 31 runs, with Root’s dismissal by Axar in the next over being a blow they never recovered from.

Ashwin proved too good for England’s lower order as he brought up his 400th Test wicket in just his 77th Test - he became the quickest bowler after Muttiah Muralitharan to reach the mark.

England’s collapse left India a target of 49 and openers Rohit Sharma and Shubman Gill didn’t take long to finish things off in the final session, batting freely and assuredly.

The final Test will begin at the same venue on March 4.