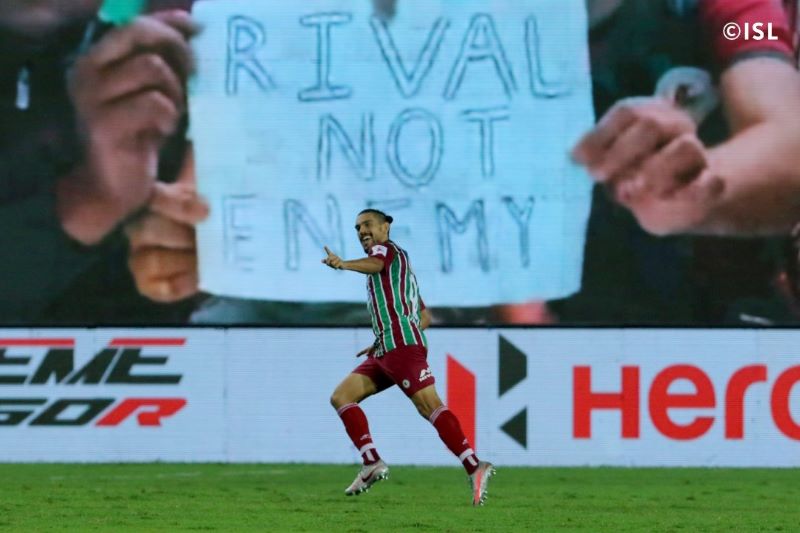 ISL: Bagan walks away with bragging rights in derby centenary

Goa/IBNS: ATK Mohun Bagan turned up as the better team on the night walking away with a convincing 3-1 victory over SC East Bengal at the Fatorda Stadium  Friday.

With this win, the Mariners finish the season of the 100th year of the legendary Kolkata derby with a double over their rivals.

ATKMB has five wins in a row now and lead Mumbai City FC by five points at the top with the latter having a game in hand.

Roy Krishna (15') opened the scoring for the Mariners before SCEB pulled one back through an own goal from Tiri (41'). Krishna later set up goals for David Williams (72') and Javier Hernandez (89') to help the Mariners secure the derby  bragging rights while strengthening their lead at the top.

ATKMB were more dominant in the opening half, creating more chances.

Bagan made their intentions clear from the start, putting the SCEB defense under pressure.

Their perseverance paid off as the Mariners were first to draw blood. Tiri pumped a long ball upfront into the box for Krishna. The Fijian displayed great control to trap the ball before producing a neat finish, extending his goal tally to 12 for the season.

Bagan fashioned another great chance in the 23rd minute but SCEB custodian Subrata Paul made a fine save. Williams threaded a through ball into the box for Marcelinho whose effort was parried away by Paul.

SCEB failed to register a single shot on target in the opening half. It looked like Bagan would head into the break with their noses in front, but a defensive error helped SCEB restore parity.

Raju Gaikwad took a throw-in and directed it at the farpost which was inadvertently diverted by Tiri into his own net.

SCEB's struggles in the attacking third continued after the change of ends as they failed to test Bagan keeper Arindam Bhattacharja. Bagan, meanwhile, failed to make the most of the chances they created.

Bagan doubled their tally after the hour mark with Krishna turning creator this time. Krishna intercepted a poor pass from Daniel Fox before laying a pass for Williams who buried his first-time shot straight down the middle.

Hernandez then put the result beyond SCEB's reach with a late goal. Krishna’s lofted pass was headed in by the Spaniard to derail SCEB's hopes of a comeback.