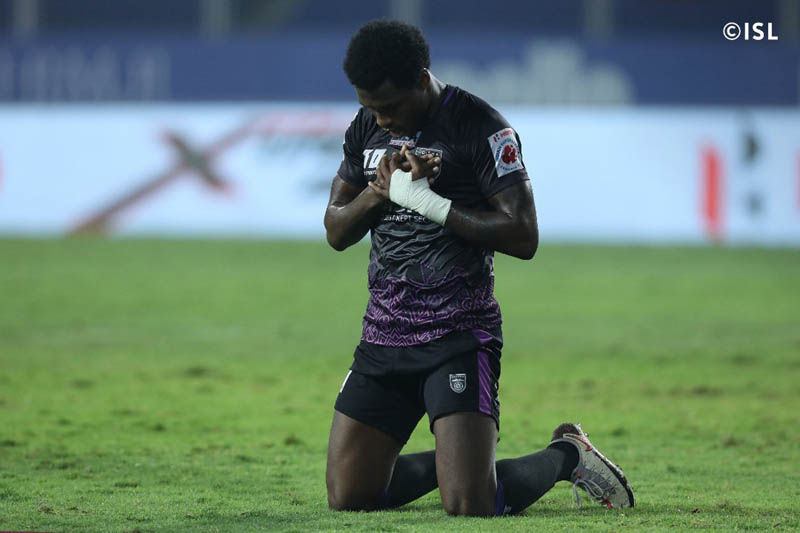 ISL: Kerala miss out on another win, held to a draw by Odisha

Goa/IBNS: Kerala Blasters FC once again squandered a winning position, playing out a third successive draw after being held 2-2 by Odisha FC in the Hero Indian Super League at the Fatorda Stadium Thursday.

Kerala desperately needed a win to revive their playoff hopes but couldn't find a way past Odisha, a side they are yet to beat.

The result meant ninth-placed Kerala are now level on points with SC East Bengal, who have a game in hand.

Odisha headed into the break with their noses in front after punishing Kerala for a defensive error. Kerala started bright and saw more of the ball in the opening half but failed to create clear-cut chances.

After dominating possession in the first quarter, Kerala missed a gilt-edged opportunity to grab the lead in the 31st minute. Sahal Abdul Samad intercepted Steven Taylor's misplaced pass and found Gary Hooper in the box. The Australian beat Jacob Tratt with his first touch but his shot missed the frame by inches.


Minutes later, Kerala failed to capitalize on another defensive mistake from Odisha. Arshdeep Singh was at fault this time as he played the ball to Hooper right outside the box. The Australian squared the ball towards Juande whose first-time shot sailed over the bar.

Those missed chances would cost Kerala as Odisha scored against the run of play. Jerry Mawihmingthanga's lob found Mauricio in the box, and he held off two markers before finding the back of the net.

Kerala came out strong after the break and it didn't take them long to find the equaliser. Hooper saw off Tratt and skipped past Arshdeep, before squaring the ball for Murray, who got ahead of Sajid Dhot and blasted his shot into the net.


Kerala's intent in the second half would bear fruit as they would take the lead for the first time in the game.

Vicente Gomez played a long ball to Sahal, who controlled the ball and picked out Murray with a reverse pass. The Englishman kept his calm and slotted past Arshdeep with ease.

But just when it seemed like Kerala were on the up, they would end up conceding again. Bradden Inman whipped a cross at the far post for Mauricio who scored a simple tap-in to draw Odisha level.

Both sides went all out in the dying stages in hopes of finding the winner. However, the goalkeepers of both teams came up with some stunning saves to keep the scoreline level.