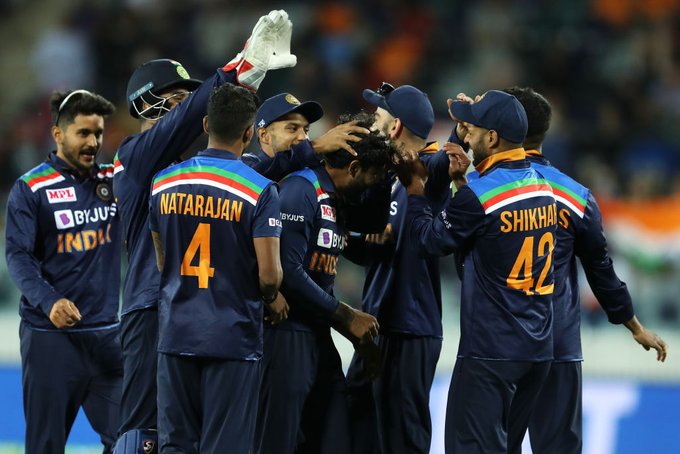 Canberra: Indian bowlers put up a strong show as Virat Kohli and his men defeated Australia by 13 runs in the third ODI match of the tri match series here on Wednesday.

After setting 302 runs for the loss of five wickets, India stopped Australian scorecard at 289 all out.

Australia won the series by 2-1 margin.

Fighting half-centuries from Virat Kohli (63), allrounder Hardik Pandya (92*) and Ravindra Jadeja (66*) lifted India to 302/5 in the third and final ODI against Australia, here at the Manuka Oval on Wednesday.

At one stage, India were reduced to 152/5 but a remarkable, unbeaten 150-run partnership between Hardik Pandya and Ravindra Jadeja for the sixth wicket gave India a fighting total to defend.

After winning toss and opting to bat first, Gill and Dhawan started off watchfully. India lost their first wicket in the sixth over at the score of 26 after Shikhar Dhawan fell to a loose shot off the bowling of Sean Abbott.

Kohli and Gill kept India ticking and combined to forge a 56-run partnership for the second wicket. Gill played some classy shots but he could not capitalise on the start and was trapped LBW by Ashton Agar for 33.

Kohli was looking to shift the gears but Ashton Agar and Adam Zampa rocked India with the wickets of KL Rahul and Shreyas Iyer in quick succession. Zampa dismissed Iyer (19) while Rahul was trapped LBW by Agar for 5, leaving India in a spot of bother at 123/4.

Pandya and Kohli were looking good in the middle as they decided to build a partnership. However, Australia’s bowlers continued to choke the scoring rate and Kohli, who smashed five boundaries during his 78-ball-63, perished while trying to up the ante.

The game looked tilted in favour of Australia when Jadeja came in to bat with the score reading 152/5 in the 32nd over. However, the spin-bowling all-rounder showed great intent and took on the Australian bowling.

Pandya, who was watchful early, also shifted gears after completing his half century and batted freely.

The duo Pandya and Jadeja batted beautifully and stitched an unbeaten 150-run partnership and took India to 302/5 after 50 overs.

Ashton Agar 2/44 was the most successful bowler for Australia.