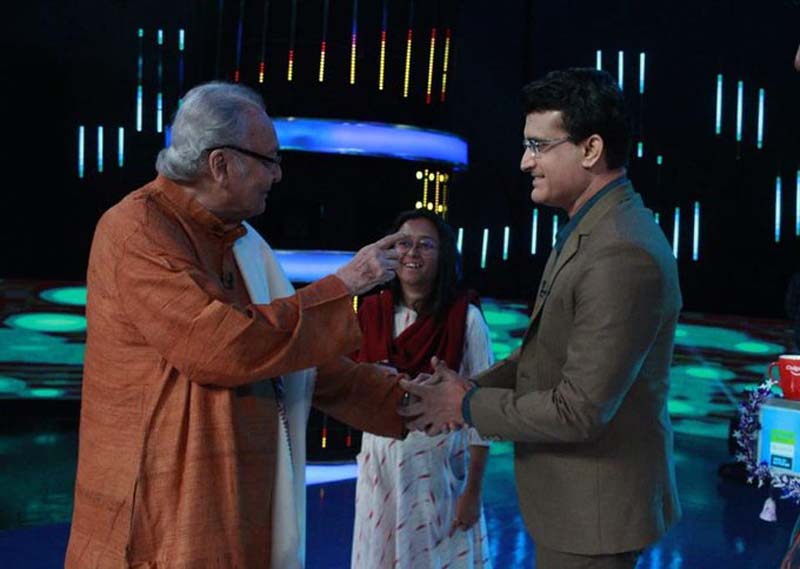 You have done so much: Sourav Ganguly tweets paying homage to Soumitra Chatterjee

Kolkata: BCCI president and Bengali's sporting icon Sourav Ganguly on Sunday shared an old image with late acting legend Soumitra Chatterjee and said he can now 'rest in peace' after doing so many memorable works in his lifetime.

Ganguly tweeted: "U have done so much ..u can rest in peace."

U have done so much ..u can rest in peace ... pic.twitter.com/MoASWLUsqQ

He battled the deadly coronavirus for days at a private hospital here and turned negative, but finally succumbed to his ailments after almost 40 days' fight.

He was on ventilation for the past few days.Chatterjee (or Chattopadhayay in Bengali), who had tested Covid-19, was shifted to an intensive care unit after his Covid-19 symptoms worsened. However,  he was declared Covid negative later.

But finally the end came on Sunday shortly after noon.

The actor, who was a favourite of  maestro Satyajit Ray having starred in his iconic Apu trilogy, and had later earned huge popularity playing Feluda, a private detective character also created by the late Oscar winning filmmaker, is survived by his wife Deepa Chatterjee, a son and a daughter.Chatterjee, who had started his career in the All India Radio (AIR) as an announcer, made his film debut with Ray's Apur Sansar, which was the third part of Apu trilogy.

Following Apur Sansar, he went on to act in Ray masterpieces like Abhijan, Charulata, Aranyer Din Ratri, Sonar Kella, Joi Baba Felunath, Ghare Baire and Jhinder Bandi.  Chatterjee, who had created his own fan following along with critical acclaim and international recognition, was a hero in many films during a golden period of Bengali cinema in the 1960s and 70s, when his contempoary was late matinee idol  Uttam Kumar.

Some of his recent films which have been widely appreciated are Bela Seshe, Posto, Mayurakshi, Sanjhbati, Basu Poribar, et al.After months of anti-Covid-19 lockdown, the legendary actor had in July resumed shooting for actor-filmmaker Parambrata Chattopadhyay's Abhijaan.Chatterjee was conferred the Dadasaheb Phalke Award, the highest award in cinema given by the Indian government, in 2012.