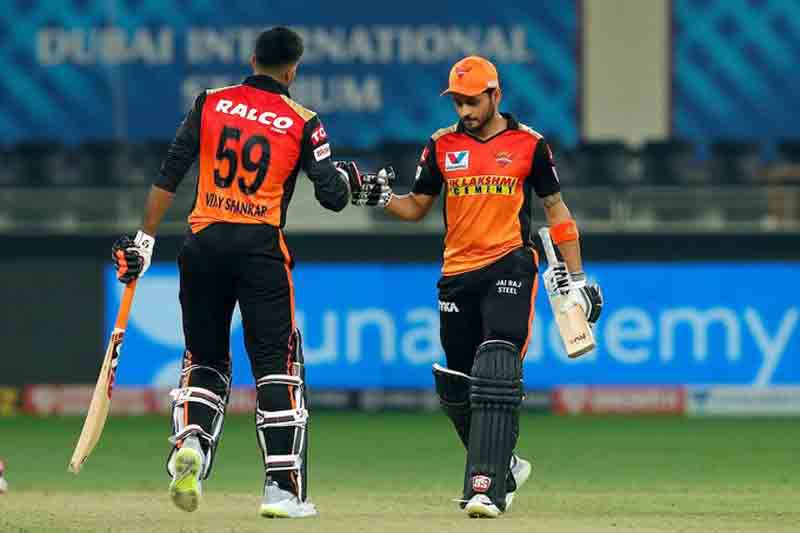 Dubai/UNI: Brilliant fifties by Manish Pandey and Vijay Shankar led Sunrisers Hyderabad to a comfortable 8-wicket win over Rajasthan Royals in the 40th match of the IPL 2020, at the Dubai International Cricket Stadium, here on Thursday.

Sunrisers Hyderabad produced a clinical bowling performance to restrict Rajasthan Royals to 154/6 in 20 overs. Jason Holder led the way for SRH with 3 wickets while Rashid Khan and Vijay Shankar also managed to bag a scalp each.

Sanju Samson's 36 was the highest score for RR, followed by Ben Stokes's 30 and Riyan Parag's 20.

In response, SRH were off to a terrible start as Jofra Archer dismissed David Warner (4) in the first over. Manish Pandey joined Jonny Bairstow in the middle after SRH captain's wicket.

Archer continued the attack and castled the stumps of Bairstow in the third over, pushing SRH in deep trouble.

From there on, Manish Pandey and Vijay Shankar batted sensibly and took SRH to 58/2 at the end of the powerplay.

After spending enough time at the crease, Pandey shifted gears and dealt in boundaries to complete his 18th IPL fifty off 28 balls. On the other hand, Vijay played the 2nd fiddle and tried to give the strike to Pandey.

In the end, Pandey stitched a 140-run unbeaten partnership for the 3rd wicket with Shankar, which proved to be match-winning in the end.

Pandey scored 83 not out off 47 balls with 4 boundaries and 8 sixes while Shankar hit 52 not out off 51 balls to give perfect support to his partner.

With this win, SRH climb to 5th on the points table, with 8 points from 10 games which keep them alive in the race for the playoffs.