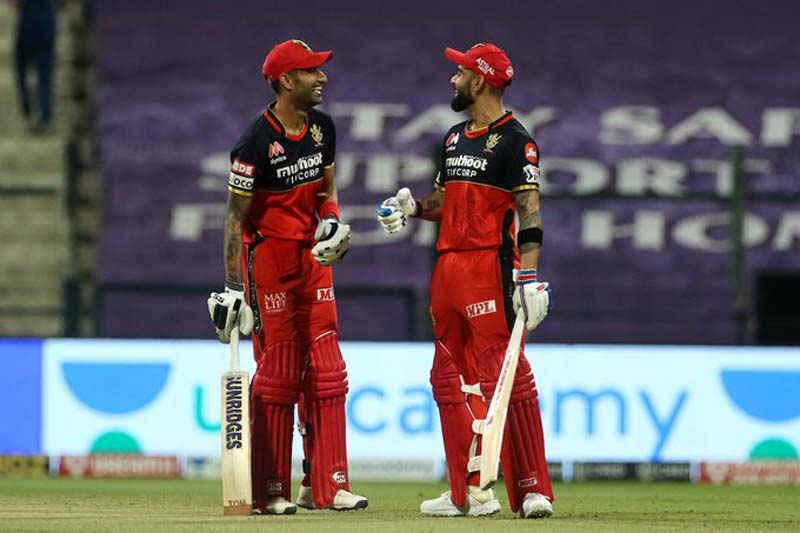 Abu Dhabi:UNI: Royal Challengers Bangalore thrashed Kolkata Knight Riders by 8 wickets at the Sheikh Zayed Stadium, here on Wednesday to move up to the second position in the IPL 2020 points table.

Batting first, Kolkata Knight Riders scored 84/8 in their 20 overs, the lowest score in IPL history for a team without having been bowled out.

Mohammed Siraj (3/8) ran through the KKR top order to trigger a stunning batting collapse while Chahal (2/15) hampered their revival hopes. Navdeep Saini and Washington Sundar also picked one wicket each.

Skipper Morgan was top scorer for KKR with 30 off 34 (3 fours, 1 six) while Gill, Tripathi, Rana, Karthik all failed to perform. Lockie Ferguson remained not out for 19.

Chasing a small target for victory, RCB were off to a solid start. Openers Aaron Finch (16 off 21) and Devdutt Padikkal (25 off 17 ) dominated KKR bowlers and took RCB to 44/0 at the end of the powerplay.

Lockie erguson, who came in to bowl the 7th over, struck in his first over by dismissing Aaron Finch. Soon, Padikkal also got run out but RCB were still in control.

In the end, RCB didn't get into much trouble as Virat Kohli and Gurkeerat Singh Mann took the team over the finish line in 13.3 overs. Gurkeerat remained unbeaten on 21 while Kohli was not out on 18.

With this win, RCB climbed to second position on the table with 14 points from 10 games and inched closer to qualifying for the playoffs. KKR on the other hand, held on to the 4th spot with 10 points from as many games.

Earlier, KKR struggled to get going after electing to bat. They lost their top order for virtually nothing as RCB were helped to a blitz of a start by Mohammad Siraj (3/8).

KKR were 17/4 at the end of 6 overs, the lowest Powerplay score this season.

RCB spinners took charge and continued the carnage with Chahal getting rid of Dinesh Karthik (4) and Pat Cummins (4) during the middle overs.
Eoin Morgan (30) held the innings together for a while it was all over for KKR after skipper Eoin Morgan was dismissed by Washington Sundar for 30 in the 16th over.