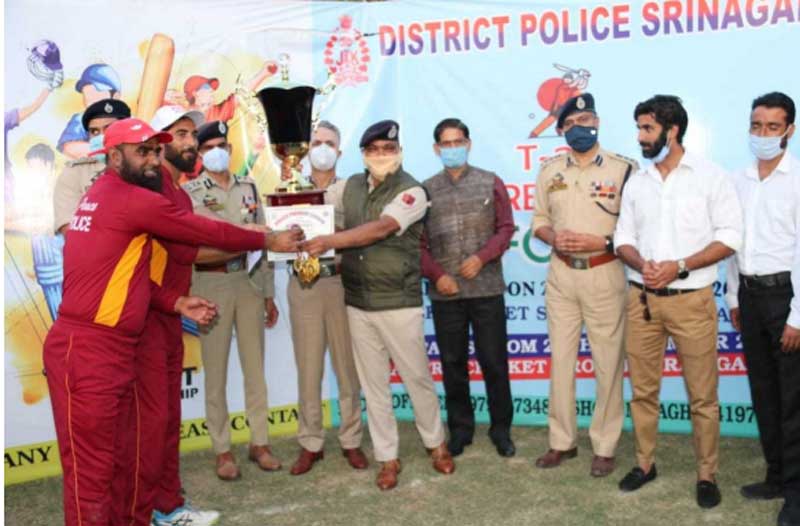 Srinagar:  Jammu and Kashmir Police is organizing various sports events for youth and together we are working for peace, which is our joint responsibility.

This was stated by the Director General of Police J&K Shri Dilbag Singh, while speaking on the closing ceremony of 2nd Police Premier League "Play for Peace" T20 Cricket Tournament organized by Jammu Kashmir Police under its Civic Action Programme, at Sher-e-Kashmir Cricket Stadium, Sonawar Srinagar on Tuesday afternoon.

Speaking on the occasion, the DGP congratulated the winning and runners-up teams.

He appreciated the District Police Srinagar and other partner agencies, persons for the successful conduct of the mega event. He thanked the media fraternity for covering the event with wide publicity.

He said the excitement and response shown by the players from 16 teams in the event is appreciable.

He said that Jammu and Kashmir Police has always been on the forefront in providing platform to youth and guide them in following their goals by organizing different events across Jammu & Kashmir.

The DGP said that in the coming days half a dozen sports activities are being organised by Jammu and Kashmir Police across the valley.

He said that one-month long sports festival will begin from tomorrow in District Bandipora and few days later in District Handwara Cricket tournament is being organised.

Similarly in District Srinagar 'Pedal for Peace' is being organised on 4th October in Srinagar and later Jash-n-Dal will be organised.

The DGP presented trophies to the winner and runner up teams. He also distributed cash prizes to the Man of the Series and Man of the match.

The event was organised by District Police Srinagar and witnessed an overwhelming response from the youth as 16 teams from the Srinagar city participated. SSP Srinagar Dr Haseeb Mughal thanked the DGP for gracing the closing ceremony event and for encouraging the youth of the district.

He said that this gesture would go a long way in nurturing sports activities in the summer capital city. The two captains of the final match thanked the Jammu and Kashmir Police for providing platform for them to show their talent and expressed their hope that such events will be organised in the future also.