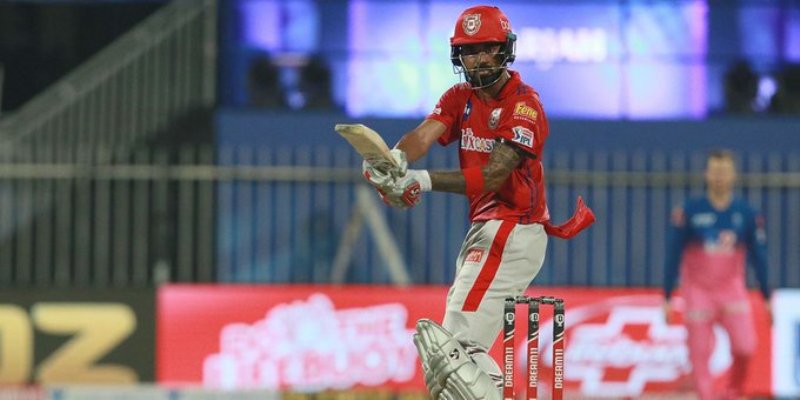 Sharjah/UNI: Excellent century knock from Mayank Agarwal 106 off 50 balls and half century from skipper KL Rahul 69 off 54 took Kings XI Punjab score to mammoth 223/2 in 20 overs against RR in the 13th edition of the IPL here at Sharjah Cricket Stadium on Sunday.

Earlier, Rajasthan Royals won the toss and opted to bowl.

Kings XI openers KL Rahul and Mayank Agarwal provided a steady start for team going after RR bowlers for boundaries from the beginning.

Both didn't spare RR bowlers and hammered them bringing up half century in just 5th over itself when Agarwal hit two consecutive fours in Rajpoot's spell.

Meanwhile, the fireworks from Agarwal didn't stop here as he smashed two consecutive sixes and a four in 8th over of Tewatia.

Then in 8.2 over Agarwal clobbered Gopal for a six bringing his fifty and another six in the same over taking him to 63 off 29 balls.

None of RR bowlers were spared by Agarwal and Rahul who dismantled their bowling line-up smashing them for boundaries.

Meanwhile, 150 came for Kings XI in 13.2 over. In the 14th over Rahul and Archer smashed four each in Archer's spell taking Kings XI score to 161.

And then in 15th over both hit four each in Gopal's over. Meanwhile, Agarwal also reached his first IPL hundred 100 off 45 balls.

Finally Tom Curran removed Agarwal who was unstoppable in 16.3 over. Agarwal 106 came in just 50 balls which included 10 fours and 7 sixes.

After Agarwal's departure Maxwell came in and added 11 runs with Rahul for the second wicket and smashed two fours of Rajpoot in 18th over, but then Rahul's innings also ended when Rajpoot claimed his wicket in same over. Rahul's 69 came in 54 balls with 7 fours and 1 six.

With both openers gone Nicholas Pooran is in and comes with a six in Curran's spell. In the last over Pooran clobbers Archer for a six and a four and again six in the last ball taking Kings XI to 223/2 in 20 overs.