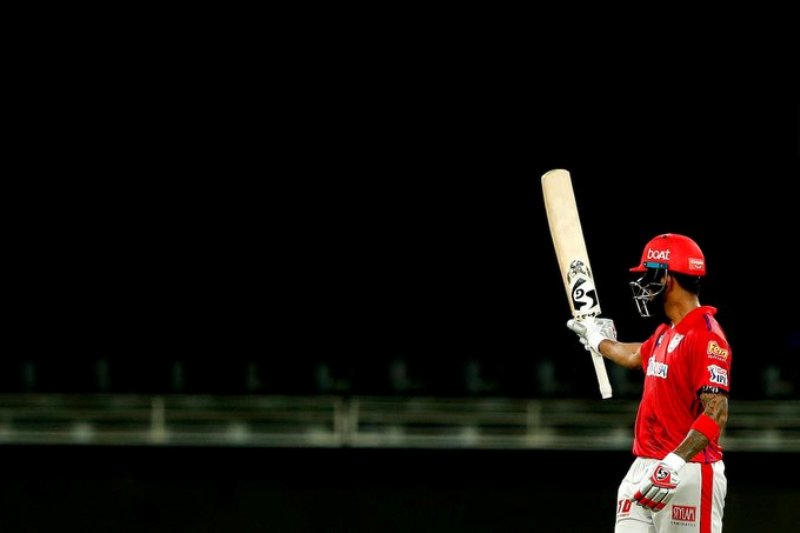 Captain KL Rahul led from the front as Kings XI Punjab thrashed Royal Challengers Bangalore by 97 runs in the sixth match of the IPL 2020, here at Dubai International Cricket Stadium on Thursday.

He overtook Sachin Tendulkar, who till today held the record for being the fastest to 2000 IPL runs.

Tendulkar, who played all six seasons of IPL for Mumbai Indians, had reached the milestone in 63 innings while Rahul did it in 60 innings. Gautam Gambhir is the 3rd on the list, who had scored 2000 runs in 68 innings followed by Suresh Raina (69) and Virender Sehwag (70).

After being invited to bat first by RCB captain Virat Kohli, openers Mayank Agarwal and Yuzvendra Chahal gave KXIP a solid start. The duo scored 50-0 in the powerplay.

Agarwal looked in great touch but couldn't convert his start into a big score and got out to Yuzvendra Chahal after scoring 26 off 20. The pair of Agarwal and Rahul added 57 runs for the first wicket.

After a superb performance with the bat, the fast bowlers stepped up and helped KXIP claim their first win of the season on Thursday.

Ravi Bishnoi (3 wicket) and Murugan Ashwin (3 wicket) were the star performers with the ball for KXIP while Washington Sundar (30 off 27) was the highest scorer for RCB.

Chasing a mammoth target for victory, RCB were off to a terrible start. After a superb performance with the bat, the fast bowlers stepped up for the KXIP with Sheldon Cottrell and Mohammed Shami taking wickets in their first spells.

Cottrell got rid of Devdutt Padikkal in the 1st over before sending back Virat Kohli for 1 in his 2nd over. In between Mohammed Shami picked up Josh Philippe's wicket, the Aussie wicketkeeper departing for a duck in his maiden IPL innings.

After losing the wickets of Padikkal, Kohli and Philippe's wicket inside 3 overs, Aaron Finch and AB de Villiers played sensibly and took RCB to 40/3 at the end of powerplay.

However, both de Villiers and Finch couldn't carry their innings longer and got out soon. Ravi Bishnoi cleaned up Aaron Finch and Murugan Ashwin dismissed AB de Villiers.

Bishnoi picked up his maiden IPL wicket by knocking out Finch's (20 off 21) off-stump while Murugan Ashwin dismissed AB de Villiers for 28, virtually ending the contest there.