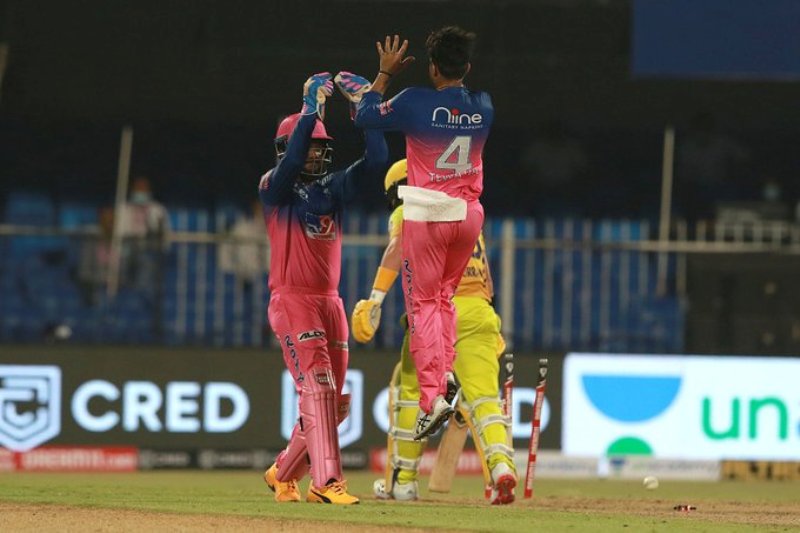 Sharjah/UNI: Faf du Plessis's fighting half-century (72 off 37) went in vain as Rajasthan Royals beat Chennai Super Kings by 16 runs in the 4th match of IPL 2020 , here at the Sharjah Cricket Stadium on Tuesday.

Inviting Rajasthan Royals to bat first backfired for CSK as RR posted a gigantic target of 216/7 in 20 overs courtesy half centuries from Sanju Samson (74 off 32) and skipper Steven Smith (69 off 47).

Chasing a mammoth target of 217 for victory, CSK were off to a watchful start. Openers Murali Vijay and Shane Watson slowly but gradually catched pace and scored 53-0 in six overs.

However, Watson (33 off 21) couldn't carry his innings longer and got out in the 7th over. Shreyas Gopal dismissed Vijay in the next over, and put CSK in trouble.

Sam Curran, who came in to next, hit two consecutive sixes to increase the tempo of CSK innings.

However, Rahul Tewatia bowled very smartly and Curran (17 off 6) was stumped in the next ball.

Ruturaj Gaikwad couldn't do much and got out for a duck. Kedar Jadhav was looking good but

Sanju Samson took a brilliant catch to sent him back in the hut which brought MS Dhoni into the crease.

In the end, CSK required 48 runs off last 12 deliveries and Faf du Plessis was fighting valiantly in the middle.

Faf du Plessis hit a fifty but CSK’s required keeps on climbing and as a result he finally got out in the 19th over.

MS Dhoni (10 off 13) and Ravindra Jadeja remained not out till the end, but couldn't help CSK cross the victory line.

Rahul Tewatia was the most successful bowler for RR with 3/37. Jofra Archer, Shreyas Gopal, Tom Curran picked one wicket each.