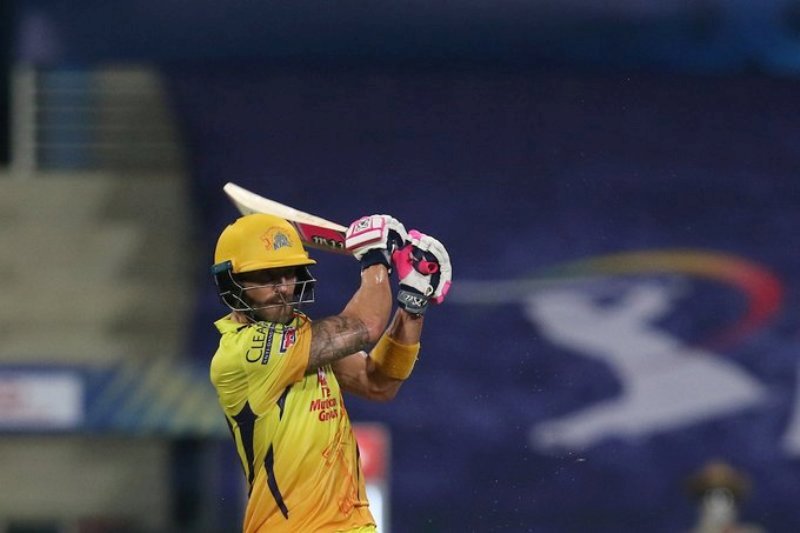 Abu Dhabi/IBNS: Chennai Super Kings started their IPL journey with a five-wicket win over Mumbai Indians as South African Faf du Plessis played a matured knock of unbeaten 58 runs to steer the side to victory here on Saturday.

The IPL opener was eventful as the tournament commenced finally after a gap fo several months due to COVID-19 delay.

Rayudu looked dominating with his willow as he smashed six boundaries and three sixes in the knock.

MS Dhoni, who announced his retirement from international cricket on Aug 15, was back on the field captaining CSK. However, he did not need to show much of his batting talent tonight.

He remained unbeaten at 0.

Brilliant knock from Saurabh Tiwary 42 off 31 and opener Quinton de Kock 33 off 20 helped MI scored a defendable 162/9 in 20 overs in the opener IPL against CSK.

However, it was Tiwary's knock of 42 and de Kock's 33 took MI score to a fighting total 162/9.Earlier, CSK won the toss and opted to field.Mumbai Indians provided a solid opening with openers Q de Kock and skipper Rohit Sharma hammering CSK bowlers for boundaries.The duo added 46 run-stand for the first wicket.

But it was Piyush Chawla who gave a breakthrough for his team scalping wicket of dangerman Rohit in 4.4 overs after being caught off at mid-off by Sam Curran.MI's first wicket fell at 46. Rohit 12 came in 10 balls with 2 fours.

After Rohit's exit de Kock took stock of the situation and was looking confident chipping in with boundaries but his stay was cut short when Sam Curran took his wicket in the very next over caught by Watson.Mumbai Indians lost their second wicket at 48.

QDK scored a quickfire 33 off 20 which included 5 fours.At one point of time when Rohit and de Kock were batting with CRR hovering over 11 per over it looked MI were heading towards a big score but with two crucial wickets of both openers by Chawla and Curran managed to put brakes.

After de Kock Suryakumar Yadav came in and along with Saurabh Tiwary pulled out MI team from further damage and duo chipped in valuable 44 runs for the 3rd wicket partnership.MIs third wicket fell at 92 in form of Yadav in 10.6 overs when caught by Curran and bowled by Deepak Chahar.Yadav's 17 came in 16 balls with 2 fours. Saurabh Tiwary played an important innings for his team and was heading towards half century but then Jadeja showed him the pavillion in 14.1 overs.

With Tiwary's fall MI lost their fourth wicket at 121. Tiwary fell 8 runs short of his 42 off 31 with 3 fours and a six.After Tiwary MIs wicket falling spree continued with Hardik Pandya 14, Krunal Pandya 3, Kieron Pollard 18, James Pattinson 11.MIs ninth wicket fell in form of Trent Boult at 156 in 19.1 overs.Jasprit Bumrah remained not out at 5.For CSK wicket-takers were Ngidi 3/38, two wickets each for Chahar and Jadeja and one each for Chawla and Curran.