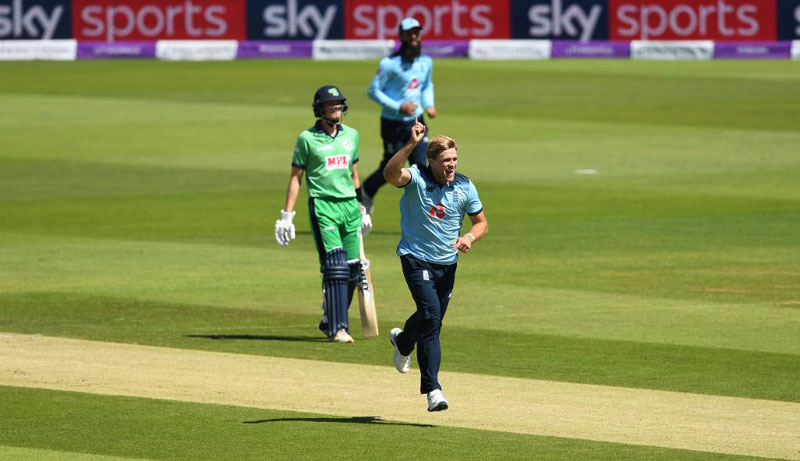 Southampton/UNI: David Willey picked up his career-best figures of 5/30 and Sam Billings hit an unbeaten 67 as England thrashed Ireland by 6 wickets here on Thursday in the first ODI following the Novel Coronavirus pandemic break

Ireland were bowled out for 172 and England chased down the target with 22.1 overs to spare.

After just 13 balls of the innings, David Willey, who was playing an ODI for the first time since May 2019, struck twice to remove Paul Stirling and captain Andrew Balbirnie.

Saqib Mahmood joined in on the action, drawing an inside edge on to the stumps from debutant Harry Tector.

With Ireland in deep trouble at 28/5, Kevin O'Brien joined forces with Curtis Campher, who made his international debut. The duo put on a 51-run stand before O'Brien holed out to long-off from the bowling of Adil Rashid.

Simi Singh lasted just four balls before running himself out as he was sent back from a suicidal single by Campher.

Campher found plenty of support from Andy McBrine. The debutant passed fifty shortly before McBrine was caught at deep square leg for 40 to end the 66-run partnership. Barry McCarthy added just three before Mahmood had him caught in the deep before Willey returned to dismiss Craig Young to claim his five-for.

Campher was left unbeaten with an impressive unbeaten 59 off 118 balls as the visitors were bowled out for 172.

In reply, England was jolted early as they lost openers Jason Roy (24) and Jonny Bairstow (2) early. James Vince was undone by Craig Young who had also removed Roy.

England was in a spot of bother at 78 for 4 when they had lost Tom Banton but captain Eoin Morgan and Sam Billings put on a 96-run stand to take the home team to victory.

Billings finished with a 54-ball 67*, his highest score in the format and third ODI fifty, while Morgan made an unbeaten 36.

The result sets England off to a winning start in the ICC Men's Cricket World Cup Super League, taking 10 points from the match.

The second ODI will be played at the same venue on Saturday.