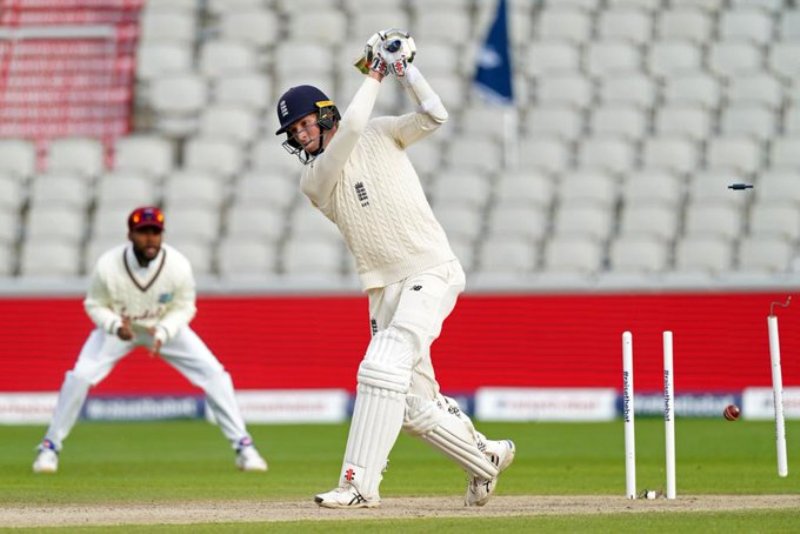 Manchester/UNI: England pacers Chris Woakes and Stuart Broad's 3-3 wickets each helped hosts bowled Windies out for a first-innings 287 after Tea on day four of the second Test at Old Tarfford on Sunday.

England were 37/2 on day 4 at stumps of the second Test against Windies taking a lead of 219 runs.

Opener Buttler was sent to the pavillion for duck while Crawley scored 11 off 15 with one four in the second innings.

Both England's wicket were grabbed by Roach.

Stuart Broad's new-ball burst has turned the tide of this game, and England's funky tactics will set up a declaration at some point before lunch tomorrow. They'll still need ten wickets to have a chance of winning the Test - and the series - but they're in a significantly better position now than they were
mid-afternoon.

While Windies were 32/1 on day two when stumps was called off, but on day 3 the match was abandoned due to continous rain throughout the day.

On day 4, Brathwaite 6 and night watchman Joseph resumed their play from 14 runs onwards. Both added 70 runs, but the partnership was broken by Bess taking wicket of Joseph. Joseph scored 32 off 52.

Resuming the session after Lunch, West Indies lost the wicket of Shai Hope (25) as Sam Curran took his second wicket in 2nd Test.

Brathwaite then joined Shamarh Brooks and put on 76 runs for the fourth wicket, the third half-century partnership of the innings.

The duo put on 76 runs for the fourth wicket, the third half-century partnership of the innings, before Stokes finally had his man. Bowling round the wicket, Stokes surprised Brathwaite with a short sharp one that returned to the bowler in the form of an easy catch.

Kraigg Brathwaite was going strong before Stokes finally had his man. Stokes surprised Kraigg with a short delivery from round the wicket to dismiss him. Meanwhile, Brooks on the other hand completed his 2nd Test fifty and is stitching a good partnership with Roston Chase.

Brooks then along with Chase till Tea added 240 runs. At Tea Brooks 60 and Chase 8 were at the crease. Brooks half century came in 96 balls with 9 fours.
After Tea England bowlers were charged up and took no time to bundle out the visitors. After remaining out of first Test Broad showed his test of character
and after Tea took three wickets.