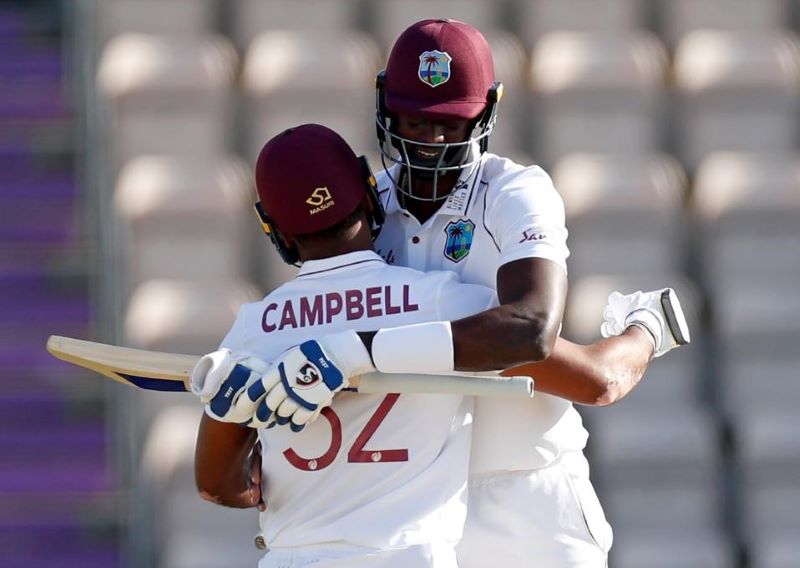 Southampton/UNI: Riding on a gritty innings by Jermaine Blackwood (95 off 154), West Indies outclassed England by 4 wickets in the first Test match at the Ageas Bowl on Sunday, taking a 1-0 lead in the three-match series.

Apart from Blackwood, Roston Chase (37 off 88) and Shane Dowrich ( 20 off 37 ) also played crucial innings and led the tourists to the historic victory.

Captain Jason Holder (14 off 36) and John Campbell (8 off 26) remained not out in the end and helped the visitors cross the victory line.

West Indies have never lost a Test while chasing a target of 200 or less and they made sure to keep that record intact, winning the first international match after cricket's return following the 117-day hiatus due to the Covid-19 crisis.

Since 2000, West Indies had won only one Test on English soil before this victory.

The Windies had bowled out England for 313 in their 2nd innings in the first session on Sunday, with the hosts taking a 199-run lead.

Chasing a target of 200, Windies got off on a wrong note as opener John Campbell got retired hurt in the 4th over of 2nd innings after a Jofra Archer's yorker hit his toe.

Soon, Archer sent Kraigg Brathwaite (4 off 18 balls) and Shamarh Brooks for a duck to the pavilion. Shai Hope (9 off 23 balls) did play some glorious cover drives but Mark Wood cleaned him up to give England the third breakthrough.

The visitors lost three early wickets, but Blackwood shared a partnership of 73 with Roston Chase to revive the hopes of the touring side.