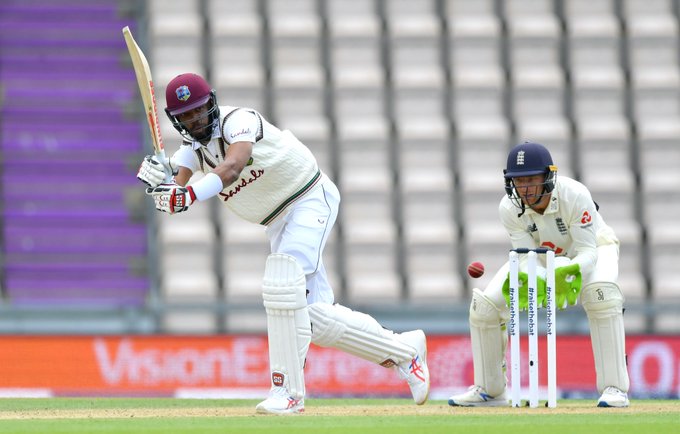 Southampton/UNI:  Pacers Jofra Archer and Mark Wood gave England the perfect start and left West Indies reeling at 35/3 at Lunch on Day 5 of the first Test at the Ageas Bowl on Sunday.

West Indies still need 165 for to win the first match of three match series, with Roston Chase (12) and Jermaine Blackwood (1 ) at the crease.

Chasing a target of 200, Windies got off on a wrong note as opener John Campbell got retired hurt in the 4th over of 2nd innings after a Jofra Archer's yorker hit his toe.

Soon, Archer sent Kraigg Brathwaite (4 off 18 balls) and Shamarh Brooks for a duck to the Pavillion. Shai Hope (9 off 23 balls) did play some glorious cover drive but Mark Wood cleaned him up to give England the third breakthrough.

Earlier in the day, England resumed their second innings from 284/8 and could add 29 runs more as they were bundled out for 313.

Shannon Gabriel finished as the pick of the bowlers with 5 wickets, his 6th in Test cricket, while Roston Chase and Alzarri Joseph bagged a couple of scalps each. Zak Crawley was England's highest scorer with 76 runs.

England had scored 204 in the first innings while Windies scored 318 in reply.